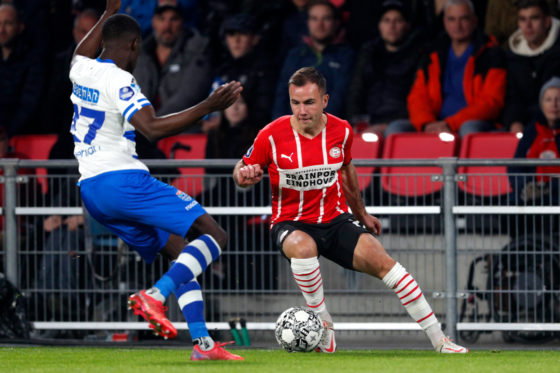 Ajax and PSV go into next weekend’s top-of-the-table clash in Amsterdam just a point apart after respective wins over Heerenveen and PEC Zwolle.

The champions won 2-0 in Friesland with goals in each half from Sébastian Haller and David Neres, both set up by Dusan Tadic.

PSV had a more difficult task at home to bottom side PEC, who took a third-minute lead and fought a heroic rearguard action before conceding three in the last six minutes.

Coach Roger Schmidt said his team’s class prevailed after they conceded a soft early goal. ‘We missed a lot of chances, time was running out and it’s never easy to stay focused. In the end the most important thing is that we were able to finish strongly and win this game.’

The three clubs at the head of the chasing pack all lost ground. Utrecht slumped to a 5-1 defeat to AZ in Alkmaar, with Dani de Wit scoring twice to take his season’s total to five.

Utrecht’s goalkeeper Maarten Paes, the outstanding player in last weekend’s 1-0 defeat of Ajax, was guilty of an 11th-minute blunder to hand AZ their second goal when he fumbled Jesper Karlsson’s tame shot into the net.

Feyenoord had to settle for a point against RKC after coming back from 2-1 down at half-time. Guus Til found the net for the seventh time this season shortly after the restart but Arie Slot’s side were unable to find a winner.

Willem II also shared the spoils in a bad-tempered game in Enschede. The hosts went ahead after Dimitros Limnios capitalised on a mistake by Ché Nunnely, but Nunnely atoned after 24 minutes with a close-range turn and shot.

The first Gelderse derby in more than four years was decided by a controversial goal from Nikolai Baden Frederiksen. Oussama Darfalou appeared to have handled the ball and carried it over the goal-line in the build-up, but the VAR panel ruled otherwise.

Part of the stand in the Goffertstadion collapsed at the end of the game under the weight of celebrating VItesse fans. Nobody was injured but the club said it would investigate and check the rest of the stadium for weak spots.

Go Ahead Eagles won another eventful derby in Overijssel against Heracles, despite finishing the game with nine men. Giannis Botos was dismissed for a heavy tackle and substitute Isac Lidberg saw red just five minutes after coming on after swinging an elbow into Marco Rente’s face. But the Eagles clung on to their 3-2 lead and added a fourth through Mats Deijl in injury time.

A late goal by George Cox earned Fortuna Sittard a 1-0 win against Cambuur Leeuwarden, while Sparta and Groningen, neither of whom have won since August 15, shared the points to keep both teams in the bottom three.