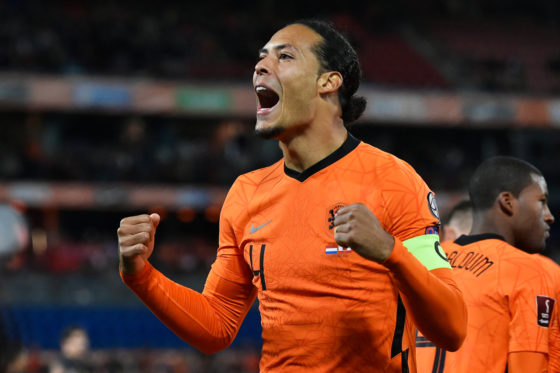 The Netherlands emerged from the latest round of World Cup qualifiers as the favourites to book a ticket to next year’s tournament in Qatar as group winners.

Oranje cruised to a routine 6-0 win over the minnows of Gibraltar on Monday evening to retain their two-point lead over Norway in Group G with two matches left.

If they win their next game away to Montenegro on November 13 they will need just a draw at home to Norway three days later to secure the automatic qualifying place.

Virgil van Dijk opened the scoring against Gibraltar in the ninth minute, while Memphis Depay scored twice, including a penalty, to take his international total to 35, including 14 in 2021, a record for a Dutch player in a calendar year.

It was Van Dijk’s first goal since he scored for Liverpool in September 2020, shortly before a cruciate ligament injury forced him out of the game for 10 months. ‘I’d been waiting for it,’ he told NOS.

‘The match was really the same as against Latvia [on Saturday, when Oranje won 1-0], except the goals came earlier and easier. We’ve done what we needed to do.’

Coach Louis van Gaal said the result reflected an outstanding performance, even though the team never threatened its all-time record win of 11-0 against San Marino in 2011.

‘Aside from the six goals we created an incredible amount of chances and hardly gave any away. [Defenders Stefan] De Vrij and Van Dijk played midway in the opposition half,’ Van Gaal said. ‘I’ve rarely seen that.

‘I complimented the team on the way they executed the plan, because it was nice to watch. We’ve proved we can score a lot of goals against defensive teams.’