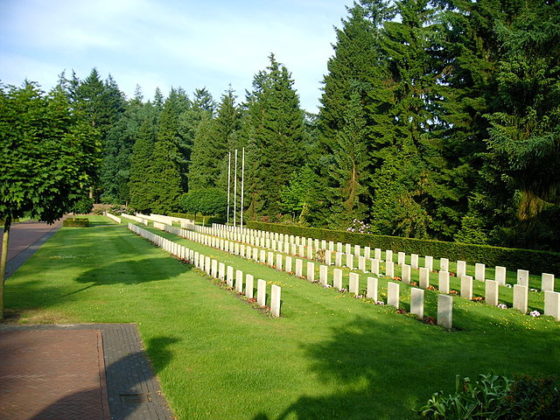 Part of the cemetery. Photo: P.J.L Laurens via Wikimedia Commons

The first of 101 Uzbek soldiers buried at the Sovjet Ereveld (Soviet field of honour) in Leusden has been identified 74 years after the end of World War II.

Ilsja Machametov was part of a group taken prisoner following the German invasion of the Soviet Union. The men were brought to Nazi concentration camp Kamp Amersfoort in the Netherlands to serve as examples of ‘Untermenschen’ to the local population, Remco Reiding, director of the Stichting Sovjet Ereveld Remco Reiding told broadcaster NOS.

‘Most were from Uzbekistan and had Asian features. But the Nazi propaganda backfired because far from contempt they aroused the pity of the people of Amersfoort. They were starved and beaten and 24 died in the first six month alone. The remaining 77 were shot in 1942 and all have remained nameless. Until now.’

Reiding and a team of volunteers have been trying to identify the soldiers since 1998. ‘If we don’t help them get their names back, then 80 years on, the Nazis will still have won,’ he said.

Some of the objects found with the bodies have been preserved, some pieces of paper among them, providing clues.

‘We received such a paper from Moscow recently,’ Reiding said, ‘and although hard to decipher we could distinguish a name and we know now it belonged to one of the soldiers buried here. He has a daughter and grandchild living and they have confirmed that he went missing in 1941. He very likely came to Kamp Amersfoort in September of that year.’

The family have never stopped wondering what became of the grandfather and are very happy they have their answer, Reiding said.  ‘But we have 101 gravestones here. I won’t rest until there is a name on every one of of them.’

A similar project is underway in the village of Margraten, in Limburg, to identify all the thousands of US servicemen and women buried there.