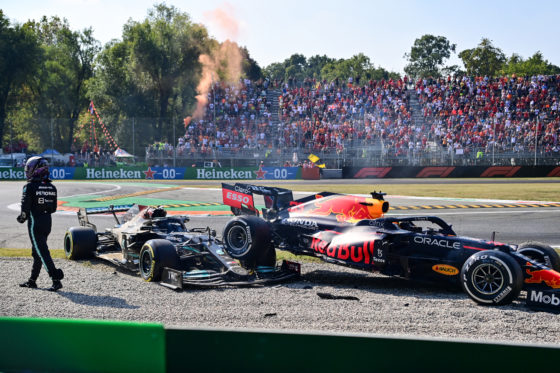 Max Verstappen walks away after his collision with Lewis Hamilton. Photo: AFP/Andrej Isakovic

Max Verstappen has insisted he was not responsible for the crash that took him and Lewis Hamilton out of the Monza Grand Prix despite being penalised by the race stewards.

The pair touched wheels as Verstappen tried to pass Hamilton on the first chicane straight after the world champion had emerged from the pits narrowly ahead in third place on lap 26.

Verstappen bounced off the kerb as Hamilton closed the gap and ended up in the gravel with his car on top of Hamilton’s Mercedes. The stewards decided the Dutchman was ‘predominantly’ to blame and penalised him three places on the grid for the Russian Grand Prix on September 26.

But Hamilton said Verstappen ‘knew what was going to happen’ during the move, after he had yielded to the Dutchman in a similar manoeuvre on the opening lap.

‘He didn’t want to give way today,’ the Mercedes driver said. ‘He knew he was going over the kerbs. But he still did it.’

Mercedes team boss Toto Wolff accused Verstappen of committing a ‘tactical foul’ to stop Hamilton winning the race and regaining the lead in the drivers’ championship, which Verstappen leads by five points.

Hamilton also said he was ‘surprised’ his rival walked past his car without checking if he was hurt after the Red Bull’s rear tyre landed on his head. Although his helmet cushioned the blow, Hamilton later said he felt stiffness in his neck.

‘I think when we go out, and when we do have incidents, the first thing we want is make sure if the guy that we crashed into or we collided with is okay,’ he said.