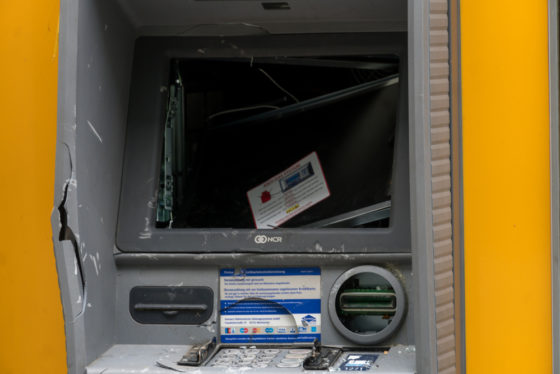 A file photo of a wrecked cash dispenser in Germany. Photo: Depositphotos.com

Three people have been arrested in the Netherlands following an investigation into attempts to blow up at least six cash point machines in Germany.

Seven separate premises were also raided as part of the probe, netting explosives, tools, clothes and a machine to count cash.

The German prosecution department has requested the three be extradited to Germany. So far, six people have been arrested in connection with the investigation.

In one attack, in Schüttdorf in February last year, a person living above the ATM was injured in the blast and two families had to be rescued by the fire brigade.  The suspects will face attempted murder charges for this explosion, the Dutch public prosecution department said.

Germany and the Netherlands started the joint investigation in February 2020 after German police discovered a 29-year-old man from Utrecht had ordered several cash dispensers from a local company in Osnabrück.

He and a 24-year-old fellow defendant used the machines to practice with explosives, the public prosecution department said. He died last September during an attempt to blow up a money machine and the 24-year-old was injured and arrested.

That arrest led to the other gang members. Their number includes a 29-year-old woman from Den Bosch who is said to have put together the explosives.