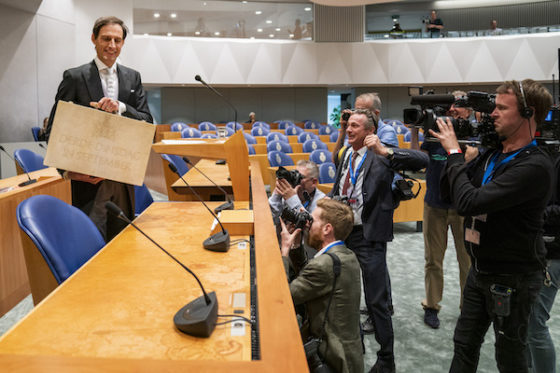 MPs from across the political spectrum called on the three parties currently in power to speed up their efforts to form a new government, after listening to the king’s speech opening the parliamentary year on Tuesday.

The speech did not contain any new policies because the cabinet is currently acting in a caretaker capacity, and this, MPs and party leaders, said, highlights the need for urgent action.

Talks on forming a new cabinet will resume next week but have been deadlocked since before the summer. The current administration has been holding the fort since resigning in January in the wake of the childcare benefit scandal.

At the same time, three opinion polls show that support for political institutions and prime minister Mark Rutte has shrunk.

GroenLinks leader Jesse Klaver said on Twitter that ‘the nitrogen crisis, the housing crisis, mounting inequality… these are problems we can no longer ignore.’

Labour leader Lilianne Ploumen, who is working together with Klaver in opposition, said ‘investors and polluters are being spared’ while nothing is being done about job security and housing, growing inequality and climate change.

By contrast, Rob Jetten, leader of the D66 coalition party in parliament, said the king’s speech did highlight the urgency of certain issues, such as housing and climate, and outlined the challenges facing the country.

And CDA MP Pieter Heerma described the speech as ‘modest’. The king rightly mentioned the society’s concerns and the danger of polarisation’. There is a clear task for politicians, he said.

Finance minister, speaking to broadcaster NOS after presenting the budget to MPs, said that the government is spending billions on new policy and ‘that for a caretaker cabinet is a considerable amount’.

Among the extra spending which has been allocated is €1bn for housing, €800m for tackling organised crime and €6-7bn for climate change but actual plans have not yet been worked out.

The Volkskrant reports that ahead of the two-day debate on the budget, a number of opposition party leaders have asked for clarity about the likelihood the Netherlands will have a new government in the near future.

The question to parliamentary chairwoman Vera Bergkamp will determine their stance during the debate, the paper said.

Commentators say that it remains open to question what, if any of the few plans announced on Tuesday will actually make it through the lower and upper houses of parliament in the coming weeks.

MPs will debate the 2022 spending plans on Wednesday and Thursday.