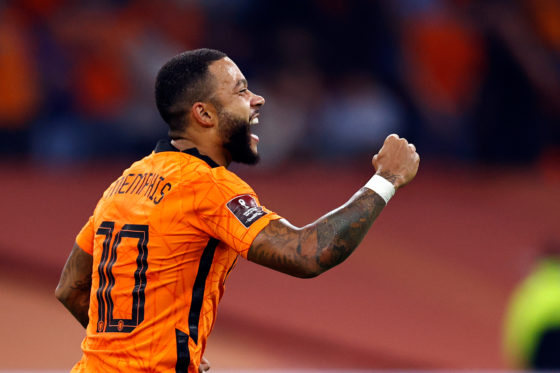 Memphis Depay scored a hat-trick as the Netherlands swept aside Turkey in Amsterdam to move to the top of their World Cup qualifying group.

Oranje took an early lead when Davy Klaassen completed a neat one-two in the box with Depay with less than a minute on the clock, and Louis van Gaal’s side never looked back.

Klaassen and Depay linked up again after 15 minutes as the Ajax midfielder hooked the ball over his shoulder to set up a simple finish.

The Barcelona man added his second from the penalty spot eight minutes before half-time and completed his hat-trick after 54 minutes when he nodded in Steven Berghuis’s headed cross.

It was Depay’s first hat-trick in an orange shirt and brought him level with Johan Cruyff on 33 International goals.

Any hopes of a Turkish comeback had been snuffed out in the 42nd minute when Saglam Söyünçü was sent off for a second bookable offence. Netherlands midfielder Georginio Wijnaldum was also booked in the first half, meaning he will miss the next match away to Latvia.

The Dutch coasted through the second half, but substitute Guus Til added a fifth goal with a smart turn and finish after latching on to Teun Koopmeiners’s pass, before Donyell Malen slotted home the sixth in the 89th minute.

Turkey scored a consolation a minute later after a mix-up between goalkeeper Justin Bijlow and Virgil van Dijk allowed Cengiz Ünder to roll the ball into an empty net.

It was an anxious moment for Van Dijk as he took a heavy blow to the ankle in the build-up to the goal, a month after returning to action following a knee injury.

Norway beat Gibraltar 5-1 to stay level on points with the Dutch, who have a far superior goal difference. Montenegro lost ground in fourth place as they could only draw 0-0 with Latvia.