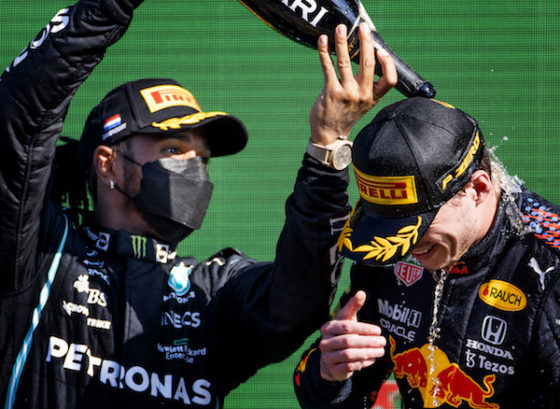 Max Verstappen has won the first Grand Prix to take place in the Netherlands for 36 years.

Roared on by a crowd of 70,000 overwhelmingly Dutch fans at the Zandvoort track, the Red Bull driver kept ahead of his British arch-rival and world champion Lewis Hamilton and now leads the championship table by three points.

Hamilton and team-mate Valtteri Bottas, who finished third, worked together in an effort to stop the Dutchman, but their efforts failed. ‘They were just too fast today,’ Hamilton was heard to say over the radio.

The Mercedes driver claimed an extra point by setting the fastest lap on the last of the 72 laps to limit the deficit going into next weekend’s Italian Grand Prix at Monza.

After the race Verstappen described his win as ‘unbelievable’ and praised the rest of the team. ‘The expectations were very high,’ he said. ‘I am so happy that I could win and take over the lead.’

Hamilton too was enthusiastic. ‘What a race, what a crowd,’ he said. According to broadcaster NOS, he also said that the Zandvoort track is already one of his favourite circuits.

LEWIS: “What a race, what a crowd, it’s been an amazing weekend.

“Max did an amazing job, so huge congratulations to him”#DutchGP 🇳🇱 #F1 pic.twitter.com/6ZjXaIH3xU

King WIllem-Alexander, who visited the pit lane before the race with Queen Máxima to wish Verstappen good luck, told Ziggo Sport he had ‘enjoyed the passion’ of the fans as Formula One racing returned to Zandvoort for the first time since 1985.

‘We saw an amazing race with the winner we dreamed of, but we also congratulate those Dutch people who respected Hamilton and acknowledged what he can do,’ the king said.

The party has started in The Netherlands 🟠🕺💃#DutchGP 🇳🇱 #F1 @Max33Verstappen pic.twitter.com/Wo2adTNw65