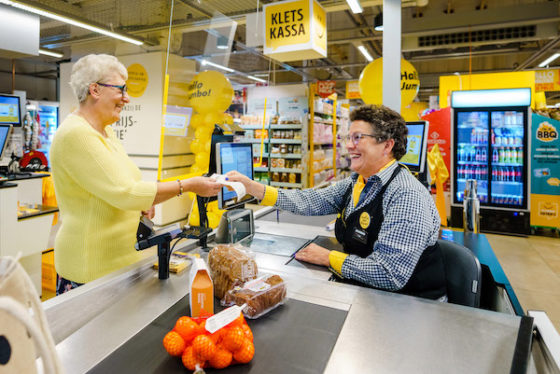 Some 200 Jumbo supermarkets will be opening up tills where clients can stop for a chat rather than pay for their shopping as quickly as possible.

The first ‘Kletskassa’, or chat checkout, as it has been dubbed, was opened in 2019 in Vlijmen in Brabant. Its success prompted the group to plan for another 200 to be operative by this time next year, particularly in shops in areas where loneliness is an issue.

‘Many people, the elderly in particular, can feel lonely. As a family business and supermarket chain we have a central role in society. Our shops are a meeting place and that means we can do something to combat loneliness. The Kletskassa is just one of the things we can do,’ Jumbo CCO Colette Cloosterman-Van Eerd said.

The supermarket chat checkout is part of a health ministry programme to combat loneliness.  The Netherlands has some 1.3 million people over the age of 75, over half of whom have said they regularly feel lonely.

The initiative is aimed at picking up the signs of loneliness among the elderly early and inviting companies, organisations and local councils to work together to come up with creative solutions, such as the chat till.

‘We are proud our staff want to work the chat checkout, ‘Cloosterman-Van Eerd said. ‘They really want to help people and make contact with them. It’s a small gesture but it’s a valuable one, particularly in a world that is becoming more digital and faster.’

Apart from the till, a number of Jumbo supermarkets also introduced a ‘chat corner’ where locals come to have a coffee and a natter.