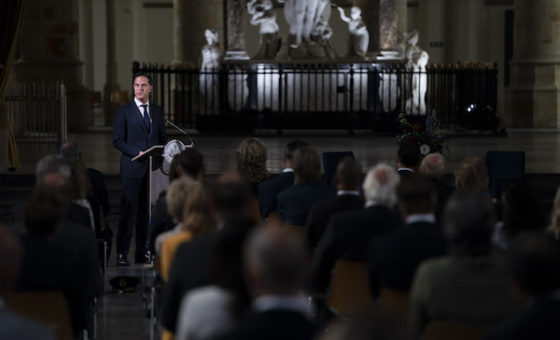 Prime minister Mark Rutte has appealed for people not to give in to cynicism and fatalism, even if many Nato ambitions in Afghanistan ‘proved impossible’.

At an event at the Grote Kerk in The Hague to commemorate the anniversary of 9/11 tomorrow, the caretaker prime minister said that he believed instant success is rare in the fight against terrorism.

‘Unfortunately, sometimes we are forced to take a step back,’ he said, in English. ‘Of course we’ve all seen the terrible images from Afghanistan. We achieved a great deal there as part of our fight against terrorism. But many of our other ambitions proved impossible.

‘That hurts. And it forces us to pause and reflect, and draw lessons for the future. But giving in to cynicism and fatalism is the last thing we should do.’

Recalling his own visit to New York on business several weeks after the attack on the Twin Towers on September 11, 2001, he praised the city’s sense of unity and courage ‘despite the nightmare they were enduring and the sorrow they were feeling.’

He also referred to the enduring impact on people like emergency workers and firefighters who had tried to save almost 3,000 people who lost their lives at the World Trade Center, in the Pentagon and in rural Pennsylvania.

‘In the past 20 years we have fought a battle against terrorism in various places around the world, in a range of coalitions and often in close cooperation with the US,’ he said. ‘This shows how strong the transatlantic bond is.’

Rutte said this bond was more important than ever to protect ‘our way of life’ from blind hate and extremism. ‘We owe it to the victims of 9/11, to our veterans and to our future generations to continue protecting our way of life,’ he added.