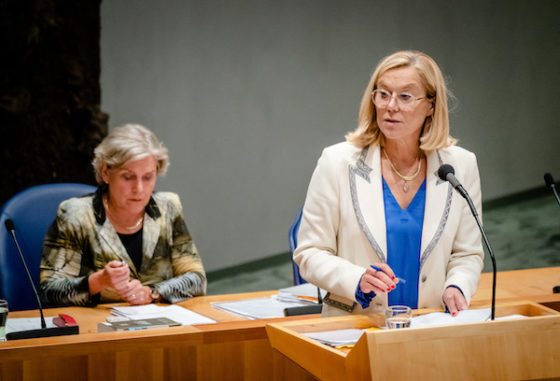 Coalition party ChristenUnie has said it will support a motion of censure against foreign affairs minister Sigrid Kaag and defence minister Ank Bijleveld over failings in the evacuation of personnel and local staff from Afghanistan, threatening a further cabinet crisis.

The support of the minor coalition party means it is now far more likely that there will be majority support for the motion at tonight’s vote. MPs must vote personally at the meeting and as yet is is not clear how many will be present.

ChristenUnie MP Don Ceder, who went public with the party’s decision, said that MPs had been urging action before the summer. ‘The urgency which parliament felt was apparently not felt by the ministers responsible for far too long,’ he said.

In addition, ministers had failed to provide MPs with what information they had, he said.

A motion of censure does not necessarily mean the ministers will resign. Prime minister Mark Rutte stayed on in April even though a motion of censure against him was passed, for his role in the Omtzigt affair. D66 leader Kaag, notably, was a signatory to that motion.

‘Such a vote would have had a major impact on me,’ she said at the time. ‘I would draw my own conclusions, but I am a different person.’

During Wednesday night’s debate, MPs said the cabinet is to blame for leaving interpreters and other support staff behind in Afghanistan. Labour MP Kati Piri said that while she is usually proud to be Dutch, she is now ‘deeply ashamed’. Others described the cabinet’s performance as ‘apathetic’ and ‘slow and vague’.

Kaag said during the debate that the cabinet had made the ‘wrong assumptions’ about the evacuation of staff from Kabul. ‘We apparently had a blind spot about how bad it would get and how quickly it would get that bad,’ she said. Ministers had also made the wrong assumptions about airport safety and dependence on the Americans, who were running the airport during the evacuations, she said.

‘I really regret it, it is terrible, but this how things are,’ she said. ‘We cannot turn back the clock.’

MPs have been urging ministers to bring back the interpreters in particular for several months, and the Volkskrant reported earlier this week that the Dutch embassy in Kabul had called for action last year.

Minister said earlier this month that 1,673 people were evacuated from Kabul by August 26 when flights stopped. They included 708 Dutch nationals, 371 interpreters and others who worked for the UN peacekeepers, 211 embassy workers and their families, plus various aid workers and other officials.

In addition, 319 of the evacuees were evacuated under the terms of the Belhaj motion, including cooks, journalists, human rights activists and security guards. The Belhaj motion is a parliamentary motion backed by a majority of MPs which said everyone who worked for the Netherlands should also be evacuated. Ministers had pledged to carry the motion out in full.