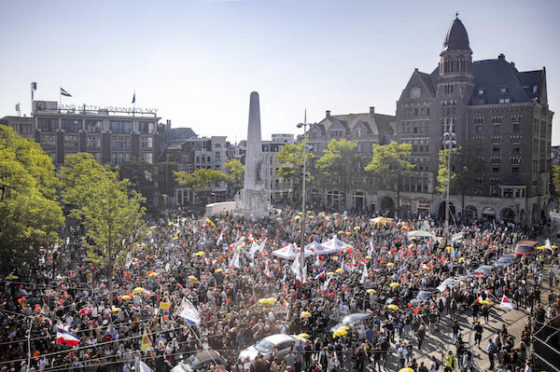 Amsterdam officials have urged people to stop coming to the Dam in the centre of the city to take part in a demonstration against the coronavirus rules because it is already too busy.

Several thousand people – up to 10,000 according to city officials – had gathered in the area by midday and then moved off to march along a seven kilometre route through the city centre.

The crowd includes representatives from far right parties, including the FvD, and several demonstrators were carrying the ‘Prinsenvlag’, a version of the Dutch flag used by neo-fascist groups.

Others were carrying banners and flags protesting about the ‘priktatuur’, and handing out stickers stating ‘born to be free’.

The march has been organised by campaigner Michel Reijinga who was behind several earlier protests. He claims 60 organisations are supporting Sunday’s protest and told broadcaster NOS he expects 50,000 people to take part.