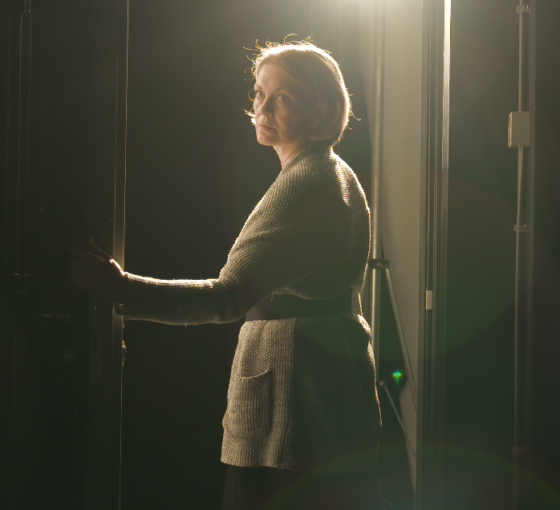 Theatre venues everywhere have been tentatively sticking their heads out of their covid shells to check the R number and it seems, at long last, the season is about to kick off. Entry rules are still in force, of course. Here are some treats to liven up a truly Dutch summer and some delicacies for when autumn really comes around.

Watch a Talking Head at last
After many delays the Queens English Theatre Company is finally presenting two of English writer Alan Bennett’s monologues from the Talking Heads series at the CC Amstel theatre in Amsterdam. The protagonists, a depressed vicar’s wife and an angst-ridden middle aged homosexual – one of the very few male talking heads – tell their stories with the characteristic Bennett blend of utter desolation and humour. August 26 -29. Website

See Romeo and Juliet at STET
The Hague based STET is presenting the German British Theatre company’s production of Romeo and Juliet which emphasises the warring principles of convention and self-determination in a modern take on the doomed lovers. It’s an open air performance so bring you brolly. September 11 and 12. Website

And why not get your ticket in for Louder is not always Clearer (tourists take heed) a solo performance by Jonny  Cotsen who is a dad, a coach, Welsh and deaf, in that order of importance, to him at least. Cotsen speaks because that is what deaf children used to be taught and in this case it’s a great boon because it enables a hearing audience to understand how he experiences the day to day life we all share. Except that his day often comes with a side dish of lazy prejudice, which he is very funny about. October 30 and 31. Website

Watch the Irish playgirl
Playboy has become playgirl in a contemporary adaptation of J.M. Synge’s The Playboy of the Western World presented by the Badhuistheater in Amsterdam from September 24. The spotlight is firmly on barmaid Pegeen, the girl who falls for a stranger who comes to town claiming to have killed his father. The play caused a riot in 1907 for a number of reasons, one of which being the way ‘Irish womanhood’ was depicted (i.e. in their night wear). Website

Take your pick at the ITA
International theatre ITA ( the Stadsschouwburg that was) in Amsterdam has a raft of plays and performances on offer for this summer and well into September and October. The programme includes Flight 49, a play about relatives who come together to mourn their loved ones who have perished in a plane crash, by Autralian Simon Stone who also directs.

Stone took some of his inspiration from the classic Dutch play Op Hoop van Zegen (1900) links by Herman Heijermans, (which features a fishing boat, and not, obviously, a plane). Surtitled in English August 11 – 21. Website

Dance lovers: there are still plenty of tickets to be had for the Summer hiphop dance festival at ITA which will take place both live and online from August 17 – 22. Website

One of the highlights of the coming season will surely be actor Hans Kesting’s monologue based on Édouard Louis’ book Qui a tué mon père (2018). Ivo van Hove wrote the theatre version in which Kesting plays both a son in search of his childhood and the tortured father he is trying to connect with, a man whose body and soul have been ruined by the grind of factory work and an indifferent state. The ITA ensemble is taking this one on tour from September 2 to October 21. Website

Get classical
While pop festivals are having a very rought time of it classical music performances have not been similarly affected.

The Oranjewoud classical music and art festival, for example, takes place in and around the village of Oranjewoud over various days and has a decidedly festivally atmosphere, food trucks and all. But people are less like too jump around to the tones of Rachmaninov perhaps, which is one of the many treats on offer. August 19 to 22. Website

If you’re quick you can still get a ticket to the open air performance of Haydn’s La Fideltà Premiata by opera company Nijetrije in Weststellingerwerf in Friesland on August 26, a very apt choice seeing how long the faithful audience has had to wait. From August 17. Website

The International chamber music Orlando festival at the abbey at Rolduc and a number of regional venues in Limburg is also going ahead after last year’s cancellation. Ludwig von Beethoven and contemporary Dutch composer Rudolf Escher (1912-1980) are this year’s main attractions. August 12-22. Website

The Grachtenfestival in Amsterdam is a showcase for young classical and jazz talent from all over the world against the beautiful backdrop of the canals. Pop up your umbrella to ensure social distancing. Again, get your tickets now, they are disappearing fast. August 13 – 22.  Website

Open up to opera
Opera lovers in the capital can also heave a sigh of relief because the Nationale Opera and Ballet company has presented its upcoming productions. For openers there is Der Zwerg, by Alexander Zemlinsky, inspired by Oscar Wilde’s story The Birthday of the Infanta, a tale of an impossible love between a Spanish princess and a small man given to her as a plaything, is about acceptance and exclusion. September 4, 8, 12, 18. Website

The National Ballet is celebrating it’s 60th birthday and kicks off with Toer, a performance of Toer van Schayk’s choreography to Beethoven’s 7th symphony. September 17, 19, 22, 24, 25, 26. Website