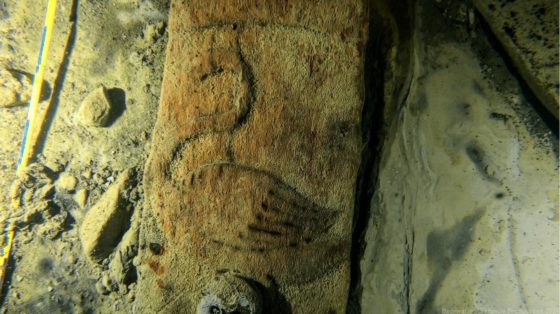 A 17th century Dutch trading vessel discovered by a Finnish diver last year on the bottom of the Baltic Sea has been identified  and dated.

The ship known as a ‘fluit’ for its deep hull which allowed it to carry a bigger cargo, was found 86 metres below the surface by Juha Flinkman who was part of a team of divers had been looking for remains of wartime battle ships.

‘My mouth fell open in amazement at what I was looking at and I had to push my brerathing gear back in,’ he told the Telegraaf at the time. “It was a fluit, the queen of trade. We had only ever seen models of this type of ship. When you hovered above it you could see its peculiar shape, with that weird round hull and a narrow deck. And incredibly it was still in one piece.’

While filming for the documentary ‘Fluit’ this summer international diving group Badewanne turned up the ‘hakkebord’, or transom, an elaborately decorated wooden board on the stern of the ship carrying its name and other identifying marks.

Incredibly, it was in good condition and on pulling it from the sand and turning it face upwards the divers immediately saw the shape of a swan and the year 1636. ‘This has restored my  belief in miracles,’ maritime archaeologist Minna Koivikko said. 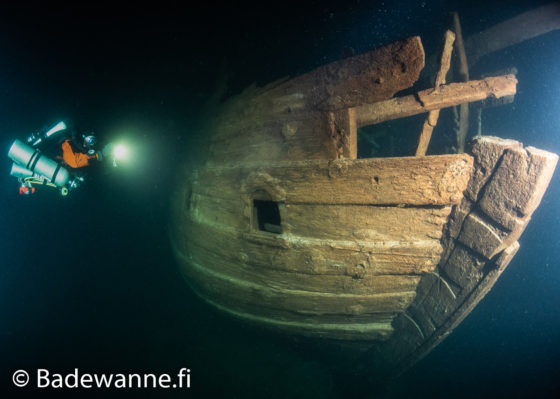 ‘You immediately think, yes! that’s what we want to see. No paint was left on the transom so we don’t know if it was The White Swan or something else, but this is a good lead. We may still find out from the transom where the ship was built once its been cleaned up properly. Chances are it was built in the Netherlands, for instance in Zaandam, and not like later fluits in the Baltic area itself.’

Manders said amateur sleuths interested in maritime history are welcome to join he search. ‘More and more archives have become available in digital form and this would be a great summer project for non professional historians to get their teeth into. It’s an interesting puzzle, just the thing for a bad summer.’

Some 3,000 fluits set off on the immensely profitable Baltic trading route every year leaving the slower and smaller vessels of competing countries in their wake. The wharfs at Zaandam would build around 70 a year.

It is likely De Zwaan was shipwrecked in a storm, Manders told the paper. This too, may provide a clue. ‘We know from research what the weather was like on a certain day in 17th century Europe. It would also be wonderful if we could find out the names of the crew members and whether or not anyone survived. That would give the story a personal touch.’