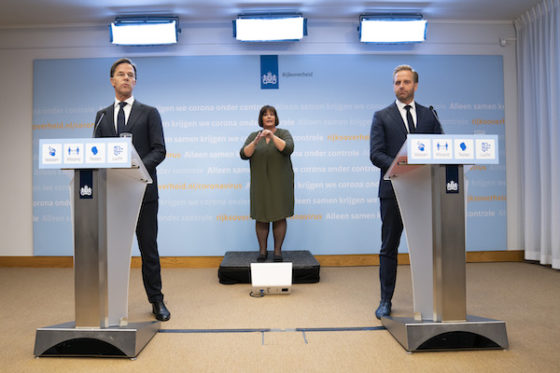 The Netherlands is striving to abandon the remaining coronavirus restrictions by November 1, if infection rates and hospitalisations allow it, prime minister Mark Rutte told reporters on Friday.

In addition, social distancing – the 1.5 metre rule – will go by September 20, if government experts say it is a responsible move to make, Rutte said.

Fees will also be introduced for the ‘test for entry’ checks at a certain point, once everyone who wants to be vaccinated is fully protected, health minister Hugo de Jonge said. However, he added, there is no question of the Netherlands introducing compulsory vaccinations.

‘Not step is without risk,’ Rutte told reporters, in the first press conference since July. ‘We do not want to be surprised again,’ he said, referring to the surge in infections in the early summer after most restrictions were removed, prompting a u-turn over large events and clubs just a few days later.

As leaked earlier, universities and colleges will be able to ditch social distancing from August 30, but a maximum of 75 people will be allowed in lectures. Students and staff must also wear masks when moving around the campus and do a self test twice a week.

Also on September 20, face masks will no longer be required on public transport and people will be able to return to the office again. However, clubs and discos will remain shut and the government is working out a special support package to help them, given regular support ends in October, Rutte said.

From September 20, a ‘test for entry’ check will be compulsory for the hospitality industry, festivals, sports events, cinemas and theatres if they have more than 75 guests or visitors.

A decision on whether this can all go ahead will be taken on September 17, following the recommendations of the Outbreak Management Team.

Health minister Hugo de Jonge said that as the figures now stand, it seems that 1.8 million people will not get vaccinated and that, according to the OMT, means there is a major chance they will develop coronavirus.  ‘They will get it in their thousands, and can become so sick that they end up in hospital,’ he said.

In an effort to encourage more people to get vaccinated, mobile vaccination centres will be sent to areas where the vaccination rate is low, and jabs will also be offered in schools and colleges.

However, the government is not in favour of making vaccination compulsory, De Jonge said. ‘We’re not going to do that. It is a personal choice.’

At the same time, De Jonge said, ‘freedom comes with responsibilities’, and this raises questions about how much the freedom of one person can interfere with the freedom of others. ‘For example, should the cost of the test for entry be shared between everyone?,’ he asked.

The government is planning to stop the free tests at some point, but no decision has yet been taken about when, he said, adding by paying for tests, the government is making it less attractive to get vaccinated.

Earlier efforts by ministers to introduce a fee for tests were overturned by parliament, although the current system is due to end at the end of August. But, De Jonge said, by September everyone who wants to be vaccinated will have had the chance to be so and ‘it is only reasonable that you pay yourself.’

And asked if a café owner could decide only to admit people who had been vaccinated, Rutte said ‘this not the Dutch way’. ‘That would be an issue for the courts, not the government,’ he said.