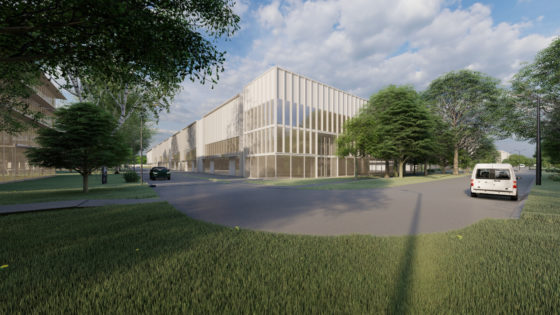 A visualisation of the CLIC site. Photo: CLIC

Businesses at a new distribution centre to be built on the A9 near Badhoevedorp on the edge of Amsterdam will be able to cut down on energy expenditure by up to 50% by pooling excess heat, cold and electricity.

The City Logistics Information Campus (CLIC), a 120,000 square metre complex, is a joint venture by investment company Somerset Capital Partners, which is putting €250m into the project, and German electricity provider Eon.

The aim is to make the centre as energy neutral as possible, relying on electric vehicles to transport food and other products to the capital.

A number of businesses in Amsterdam have been unable to plug into the local electricity networks because these have reached their maximum capacity. The new system would alleviate the pressure on the networks.

A similar project has already proved successful in Sweden and more are planned in Poland, England, Germany and Italy.

‘We expect to be realising some 25 to 40 of these projects in the Netherlands alone,’ head of Eon European commercial operations Patrick Lammers told broadcaster NOS.

Machiel Mulder, professor of energy economics research at Groningen University, praised the project but doubted it could become profitable. ‘But it would certainly help if, for instance, surplus electricity from solar panels could be put to use locally.’

Lammers denied Eon is shooting itself in the foot by reducing demand for energy. ‘We will still be providing electricity when needed. (..). We are also doing this because the world needs renewable energy sooner rather than later. Just take a look at the latest IPPC report.’