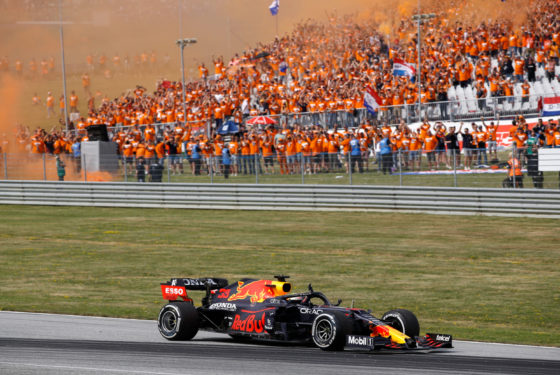 Max Verstappen said he enjoyed an almost flawless race in Austria after stretching his lead in the Formula One drivers’ championship to 32 points.

Verstappen held the lead from pole position despite a strong challenge from Lando Norris’s McLaren and then pulled away, winning by a distance on Red Bull’s home circuit for the second weekend on a row.

Behind him Norris overtook world champion Lewis Hamilton in the closing laps to relegate Hamilton, who suffered damage to the underside of his Mercedes car, to fourth place.

‘I only really had to watch out on the first few corners,’ Verstappen said. ‘After that Lando had to defend and I could just drive away.’

‘Last week it was nice to win the team’s home race here, but this was even better with all the Dutch fans,’ he added, referring to the packed orange-clad stand at the Red Bull Ring. ‘I hope we can keep this line going. It was a joy to race with this car today.’

Hamilton acknowledged that Verstappen’s Red Bull had been the superior team both last weekend and at the Styrian Grand Prix on the same circuit a week ago.

‘Looking at Max’s lead we’ll need to put in a lot of work to close the gap,’ he said. ‘It’s been a tough couple of races. Hopefully the car will feel better in Silverstone in two weeks’ time.’