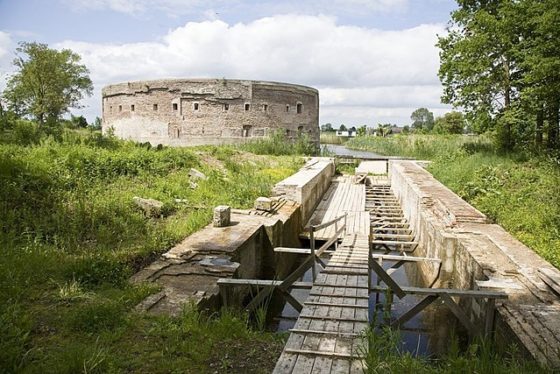 Uitermeer fort is part of the defence line. Photo: Bert van As via Wikimedia Commons

The Hollands Waterlinie defence lines are being officially included on the Unesco world heritage list, even though the UN body’s experts had said they doubted whether the fortification network was being properly protected.

The committee of experts had in June that the Netherlands should revise its application for the water defences, which were designed to keep out invaders by the controlled flooding of a chain of spaces to a depth of up to a metre.

The inundation line was laid in the 19th and 20th centuries and runs from Fort Naarden to Fort Steurgat in the Biesbosch. The line consists of a system of waterworks and over 1,000 forts, casemates, sluices and wooden houses.

The fate of two other potential Dutch entries, the Lower German Limes and the ‘Colonies of Benevolence’ in Groningen and Drenthe will be decided this week.

The Limes (paths) are one of the frontiers of the Roman Empire in Europe and ‘provide a fine example of the development of an urban infrastructure in a region without central places, illustrating the spread of Roman administrative and architectural traditions,’ Unesco said.

The colonies were developed in the 19th century as social projects for poor families, orphans, ‘fallen women’, retired military personnel, beggars and vagrants. They are, according to Unesco ‘one of the most remarkable social experiments, based on 19th century, Western, Utopian thinking on the social order.’

The most famous of the colonies is in Veenhuizen, where there is a museum and a prison which is still in operation.

The last Dutch heritage site to be included on the list was the Van Nelle factory in Rotterdam.

There are now 10 Dutch cultural locations and one natural site on the official list.