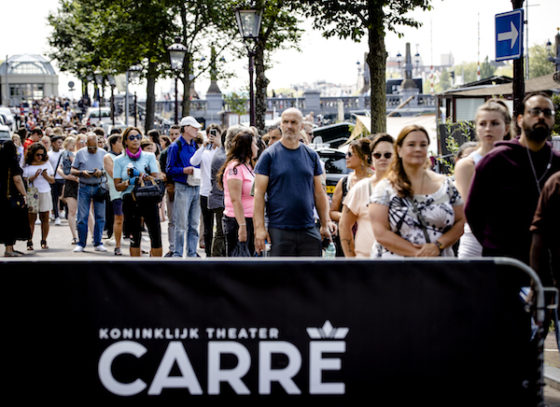 Thousands of people have been queuing outside the Carré theatre in Amsterdam to pay their respects to murdered television journalist Peter R de Vries.

By 11am, the queue stretched for more than half a kilometer, broadcaster NOS said. The theatre is open until 8pm for well-wishers.

Some people were crying as they waited outside. One well-wisher told NOS that the white coffin inside the theatre is surrounded by flowers and cards. ‘The coffin, the roses, all those photos with his portrait,’ one said. ‘It was really impressive.’

A spokesman for the Monuta funeral organisers said around 1,000 people had been inside by 1pm.

De Vries was perhaps best known for his work on cold cases – ensuring that several high profile murders were finally resolved years after the fact. But he also fought for refugee rights and was a staunch critic of racism and far right politics.

He was shot in the head from close range on July 6, just after leaving a television studio at around 7.30pm. Two men have been arrested for the murder and have been remanded in custody.