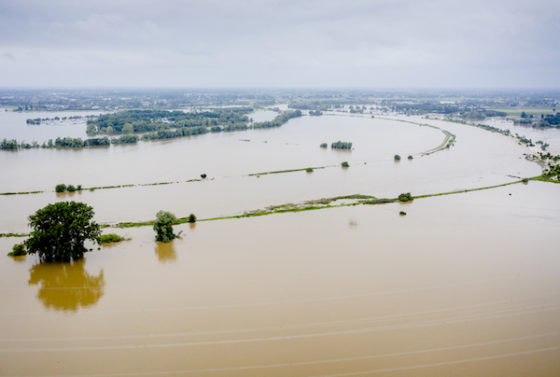 A dyke alongside the Juliana canal in the south of Limburg broke through on Friday afternoon, leading the local safety board to urge people in several villages to leave their homes as a matter of urgency because flooding was inevitable.

The initial breach was around a meter wide but likely to expand as the pressure of water continued, officials said.

Meanwhile, the water level in the river Maas, which runs parallel to the canal, is expected to reach its peak in Roermond around 3pm and in Venlo, further downstream at 3am. Venlo’s main hospital has already been evacuated as a precaution.

The Dutch government has declared the regional floods as an official disaster, which means the state will pick up the bill for much of the damage. ‘It is very clear that the situation is disastrous,’ prime minister Mark Rutte told reporters on Thursday evening. ‘People are worried about their homes and their jobs.’

After major floods in 1993 and 1995, the Dutch government invested €2.4bn on providing better flood plains, but that work has not been enough to deal with such a volume of water. Over 10 centimetres fell in 24 hours, and over 20 centimetres over the three day period – a once in a thousand year occurrence, experts say.

‘Rain can cause problems in the Netherlands but this is a wake up call which shows rain can form a threat to public safety,’ Alex Hekman, from civil engineers Sweco told the Financieele Dagblad.

The flooding has been caused by very heavy rain in nearby hilly parts of Germany and the Ardennes region in Belgium as well as in Limburg itself. While the floods have caused widespread damage in the Netherlands, in Germany and Belgium the problems have been far more severe.

At least 80 people are now thought to have died in Germany after the floods caused houses to collapse, while the death toll in Belgium is put at 23.