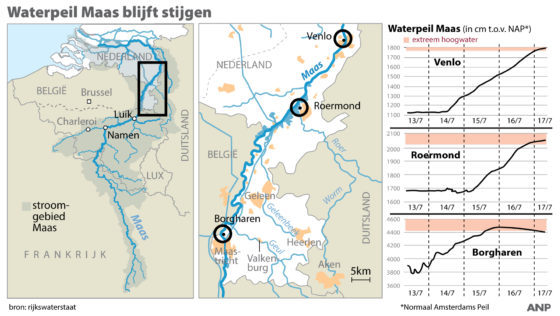 The water level in the river Maas in Limburg is set to reach five metres higher than normal on Thursday evening, after torrential rain brought flash floods to the region.

The level is by far the highest ever reached in the summer in the past hundred years and is likely to break the winter records set in 1993 and 1995, when there were mass evacuations, a spokeswoman for the infrastructure ministry said.

At least 42 people are now thought to have been killed in Germany and six in Belgium after flash floods swept through village streets and brought down houses.

In the Netherlands, the town of Valkenburg near Maastricht is worst affected. There a bridge has been washed away and two nursing homes, hotels and a campsite have been evacuated. So far there are no reports of any deaths or injuries.

The army has been drafted in to help the relief effort after more than 10 centimetres of rain fell in a short space of time.

Six lifeguards from The Hague have also traveled to the region to help with the evacuation.

6 lifeguards from The Hague went to Limburg last night to help out with the flooding. Good luck @RBDenHaag! https://t.co/toC5fIqXdl

‘There is a river flowing through Valkenburg which should not be there,’ local mayor Daan Prevoo van Valkenburg told NPO radio.

Parts of Roermond, close to the swollen Hambeek river are also being evacuated and sandbanks are being placed to keep flood water out of Maastricht’s main hospital.

A stretch of the A2 motorway is also closed in both directions because of the flood risk.

People are also being urged to stay in their homes until the water has gone down because of the currents. ‘You can be dragged away,’ Maarten de Kever from the local safety board told NPO news.

The KNMI weather bureau has withdrawn its code red weather warning for parts of Limburg because of exceptionally heavy downpours but warns that more rain is on the way.

A code yellow weather warning for more heavy rain is now in place for all of the country apart from the three western provinces.