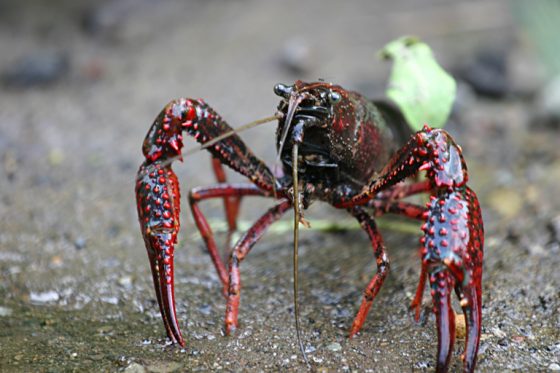 The American invader: ‘It wasn’t me’ Photo: Mike Murphy via Wikimedia Commons

An investigation has been started into the cause of a dyke breach in Reeuwijk in the province of Zuid Holland in the early hours of Monday morning, with the American crayfish one of the contenders.

The farmer whose field were flooded as a result of the breach told local broadcaster Omroep West that, in his opinion, the breach was down to the destructive American crayfish rather than the recent flooding in Limburg.

‘They are gnawing away at the dyke and its condition is getting worse. The weakest links break,’ he said. ‘If we don’t do something about this animal more damage will be done.’

Others have suggested the cows which have trampled the dyke have caused it to shift and break.

The Rijnland water board has called the crayfish scenario unlikely but said it is not ruling anything out. ‘We are awaiting the results of investigation,’ a spokesman said.

Wageningen researcher Ivo Roessink said there are circumstances in which the crayfish may have contributed to the damage to the dyke. ‘Crayfish like to dig holes and there have been – a very few – examples of rats digging away on the other side. Leaks have been known to occur as a result but it very rarely happens,‘ Roessink told the broadcaster.

The crayfish – Procambarus clarkii, or red swamp crayfish – are thought to have travelled from their native United States in the ballast tanks of large freighters in the mid 1980s and are well adapted to local waterways. They are particularly common in Utrecht, Noord-Holland and Zuid-Holland.

The crayfish have very few natural enemies and their number is now thought to run into billions. Its voracious appetite and destructive habits are detrimental to water quality and diversity.