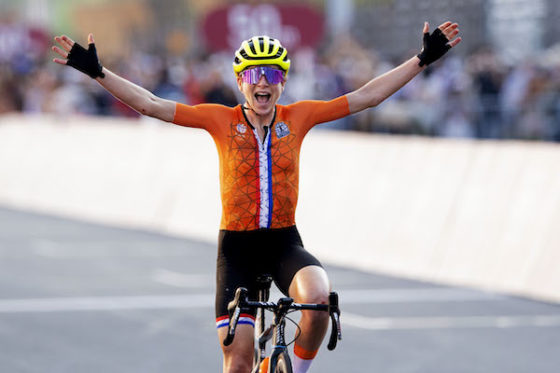 Annemiek van Vleuten has won silver in the women’s road race at the Tokyo Olympics, but actually thought she had won when she crossed the finishing line.

The Olympic title was taken by Austrian amateur cyclist Anna Kiesenhofer, but poor communication meant Van Vleuten was not aware that anyone was in front of her, after she had overtaken Polish and Israeli contenders.

‘I thought I was first,’ she told broadcaster NOS directly after the finish. ‘I was wrong. We were not told anything.’

Annemiek van Vleuten, 38, missed out on gold in Rio after a heavy fall during the race. She was favourite for the title and the four Dutch women in the race all had a medal hope.

The silver is the second medal so far for the Netherlands. On Saturday, Gabriela Schloesser and Steve Wijler won a surprise silver in the mixed team archery competition.

Elsewhere at the Olympics, the women’s 4×100 freestyle relay team, also considered a medal contender, finished fourth, and in gymnastics, defending beam champion Sanne Wevers failed to qualify for the final.

Wevers and her sister Lieke are both in Tokyo but without their coach and father Vincent, who has been embroiled in the row about the pressure on, and abuse of, young gymnasts.

Four of the five were on the same flight, broadcaster NOS reported.