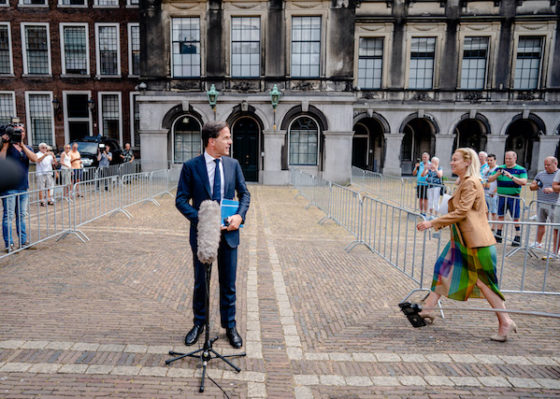 Prime minister Mark Rutte and D66 leader Sigrid Kaag are going to sketch out the contours of a coalition agreement, following the failure of weekend efforts to break the stalemate in the cabinet formation talks.

The leaders of the two biggest parties will start putting an agreement down on paper at the suggestion of coalition negotiator Mariette Hamer, who said on Tuesday that by mid August, the parties prepared to form a new coalition government must be involved in serious negotiations.

The aim is not to draw up a cut and dried agreement but to see if the other four parties still in the talks agree with the problems and solutions put forward by Kaag and Rutte. Those that do, could then have input into a definitive coalition agreement.

It is almost 100 days since the March general election and the formation talks have reached an impasse, with the six parties on the shortlist for inclusion unable to agree about who can work with who.

Rutte told reporters after meeting Hamer at the parliamentary complex on Monday that he still wanted to see a four party coalition as soon as possible but declined to go into more details about the process. He is known to prefer that the current coalition – VVD, CDA, D66 and ChristenUnie – should have a second term.

Meanwhile, Labour leader Lilianne Ploumen has criticised the VVD and CDA for refusing to countenance a coalition with the PvdA and GroenLinks. ‘I am ready to talk, together with GroenLinks, but the two right-wing parties are blocking this, without really giving a reason,’ she said.

D66, however, is keen to work with GroenLinks and the VVD rather than the ChristenUnie.