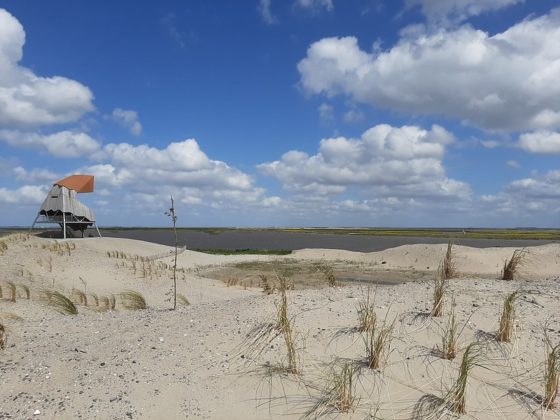 Look out tower on the Marker Wadden  Photo: Dirk Wijnen/Natuurmonumenten

The Dutch are experts at reclaiming land from sea – but the latest 1,000 hectares that it has added in the Markermeer are mostly for the benefit of nature.

A ten-year, €78 million project has led to the opening of five new islands known as the Marker Wadden.

Where once the water was dead, as a result of years of building the artificial region of Flevoland and its roads, now biodiversity is returning. On four of the five islands, reserved for nature alone, a team from Natuurmonumenten has seen 150 sorts of plants, 20 types of fish, birds, insects and spiders.

The final island, built from the same silt, clay and sand, is intended to generate running costs for the national reserve, with the possibility for boats to dock by a visitor centre and four luxury chalets, run via Landal GreenParks to generate cash for the body Natuurmonumenten.

Marjolein Koek, a spokeswoman for Natuurmonumenten, said the islands are hoped to be part of a chain of 10,000 hectares, built to bring nature back to the water.

‘We dream big but we look at it step by step,’ she told DutchNews. ‘The plan is really to do this for nature and in order to generate the running costs, there’s one island available for people.’

Visiting this island is one of the highlights of her job. ‘The lovely thing about the Marker Wadden is that it is so new,’ she said. ‘Every time you go there, it looks completely different: I went there for the first time when it was just a big sandpit, a year later everything was green and another year later there were trees, bushes and nesting birds. We just build the land and nature does the rest.’

A decade ago when the first plans for the area began, however, it was a different story. ‘The Markermeer was dead,’ she said. ‘There were no natural embankments: it was a concrete trough full of water, without healthy underwater life…But with the islands you create a more natural system again.’

Roel Posthoorn, project director from Natuurmonumenten, said in a press release: ‘It is almost unimaginable how a completely new landscape has developed from nothing.’

So far, around 50,000 people have visited the Marker Wadden and two new islands are being built by the firm Boskalis, with funding also from central and local government. A boat leaves twice a day from the Bataviahaven in Lelystad, and another boat service also serves the chalets.

At the time of writing, there was one chalet booking available in 2021…It’s today, and the boat leaves at 4pm.