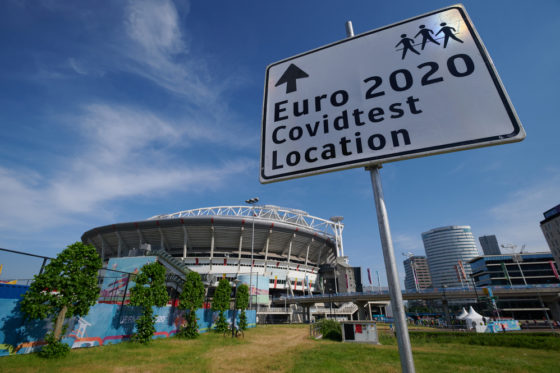 Fans have to have a negative test to attend a match. Photo: Depositphotos.com

Four of the Euro 2020 football matches are being held in Amsterdam’s Arena stadium in the south east of the city. But the locals say any sense of occasion has passed them by.

The imposing stature of the Bijlmer Arena concrete train station offers an appropriate welcome for the thousands arriving to attend Euro 2020 matches in the southeastern Amsterdam district. It’s narrow bridging design supports a rail line that divides this vibrant and rejuvenating corner of the city into two parts.

It’s in the Bijlmer area, specifically in Ajax’s Johan Cruijff Arena, where four Euro 2020 games are being hosted, including the round of 16 knockout fixture on Saturday between Wales and Denmark.

Coronavirus restrictions have drastically reduced capacity in the stadium, which used to host 55,000 people on big match days. Nevertheless, the stadium has been able to host around 16,000 people for the three Euro 2020 matches so far.

But for the locals, the football fans who cross from the metro straight into the stadium, might as well have been in another city altogether.

‘They don’t communicate with the neighbourhood. It looks like two different areas over here,’ says Ronnea Willemse, the owner of Nico’s butchers to the east of the station and the dividing railway tracks.

The arcade containing Ronnea’s butcher shop feels a long way from the part of Bijlmer that hosts the Euro games, sitting in the older and more locally-oriented area.

Much is being done to try and shake off the Bijlmer’s reputation as a neglected part of town where crime and drug use is rife, and new low-rise homes are emerging alongside the 1970s blocks. The array of multicultural shops and market stalls here give credence to the fact the neighbourhood is home to more than 130 nationalities.

Anchoring the arcade is a weathered looking covered market that hosts everything from colourful east African garments to phone repair kiosks. Hidden between stalls, Akmat Tarem has been running his optician store for six years and lives locally.

With a flicker of humour, Tarem suggests that the nuisance caused by some football fans might be a relief for shopkeepers in this less visited part of the Bijlmer. ‘They are drunk and you don’t want drunk people in your shop. It’s better for them to stay there,’ he says. 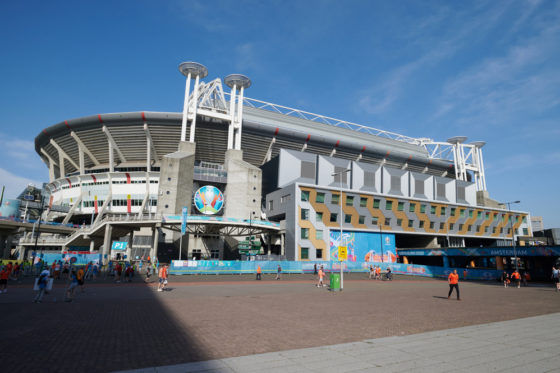 Steps away from the market hall, Ali Hassan stocks shelves with two other associates in Shan’s Beauty and Cosmetics. ‘You see a couple of fans walking here, coming here to buy a beer. They buy alcohol and then they go back there,’ he says about the supporters that do make their way to this end.

With safety in mind, the government ban on showing matches in pubs and cafes has also ensured there is no convivial overflow between both sides of the tracks – although the ban is now being lifted.

If fans would walk around a little more, they would really see the neighbourhood, he says. ‘We have people from all over the world, Suriname, Pakistan, India, Dutch people, Moroccan, Turkey. I like the mix.’

And he welcomes the fact that football matches are being held again. ‘The people  need it after coronavirus,’ he says.

When asked whether he senses locals are worried about pandemic spread with visiting football fans, Hassan says with a shrug: ‘I don’t see people worried about corona here.’

‘Everybody is following the 1.5 metres rule and wearing masks. I don’t see anybody violating that or violating people’s spaces.’

The area is also home to the Open Space Contemporary Art Museum (OSCAM) which hosts exhibitions, workshops and other events aimed at locals. Host and producer  Julie Becker, says she does not notice football fans passing through either.

‘It’s sort of connected, but still segregated,’ she says. ‘Usually people that come here for the big stores, the movie theatre, for the concerts and the games. They don’t really come to this side of the district.’

She highlights how the eastern side benefits from better and cheaper food, along with its cultural offerings. The football fans, she says, ‘miss out on a lot.’

They might be in for a surprise, she says ‘if they would just come here and check it out’.