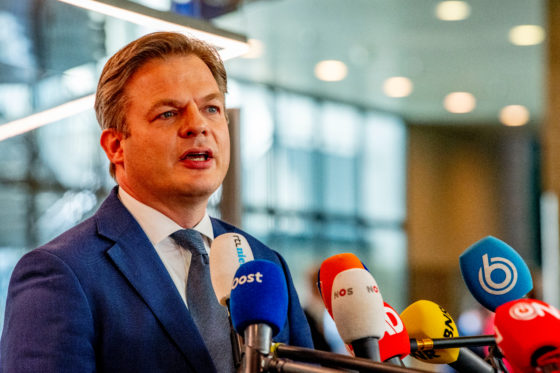 Pieter Omtzigt stepped down as a CDA MP this month. Photo: ANP/Robin Utrecht

Support for the Christian Democrats (CDA) has plummeted in the wake of the row that led to the departure of Pieter Omtzigt, latest opinion polls show.

The poll of polls (Peilingwijzer), compiled by academic Tom Louwerse, puts the CDA on between seven and 13 seats, or 5% to 8% of the vote. The party won 15 seats in the general election on March 17, losing four.

The CDA has been in turmoil since an internal memo by Omtzigt was leaked to the media, in which he complained of being marginalised since losing the leadership election last July and claimed large donors had too much influence on policy making.

The 47-year-old, who has been on sick leave with stress since the end of May, cancelled his party membership after the document was leaked. Party activists have triggered a special congress in the autumn, putting further pressure on party leader and caretaker finance minister Wopke Hoekstra. 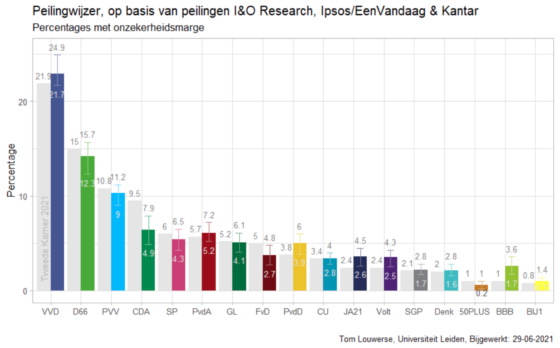 The aggregate poll also shows the right-wing liberal VVD, led by Mark Rutte, would add between one and six seats to its current 34, while the progressive liberal D66, which has 24 seats, would win between 19 and 25. The pair are seen as the core of the next coalition.

The next largest party, Geert Wilders’s anti-Islamic nationalist PVV, is forecast to take between 14 and 18 seats, in line with its current total of 17.

Louwerse said the findings, based on two polls since the election by Ipsos for EenVandaag and I&O Research, were unsurprising given that many party members were unhappy with the treatment of Omtzigt.

‘In the Ipsos/EenVandaag poll CDA voters are mainly switching to the VVD, who don’t seem to be badly affected by the debate about Mark Rutte’s style of government.’

There are also significant shifts on the right flank, where Thierry Baudet’s Forum voor Democratie appears to be losing support to JA21, a splinter group that broke away following revelations of anti-Semitism in the party.

Other newcomers, including the Farmers’ Citizens Movement (BBB) and pro-European party Volt, have also made gains in the immediate post-election polls, as has the animal rights party PvdD.

‘The gains for JA21 and BBB are mostly at the expense of right-wing competitors such as Forum, while Volt are mainly appealing to non-voters, according to Ipsos/EenVandaag’, said Louwerse.