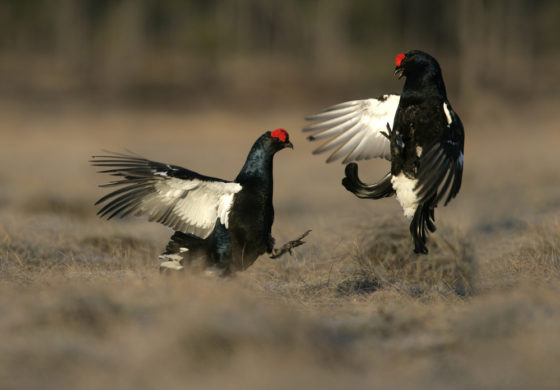 The provincial authorities have decided to continue to stock the Sallandse Heuvelrug nature reserve with black grouse from Sweden for the next five years to save the protected species from extinction, even though attempts so far have failed.

The nature reserve is the only habitat of the black grouse left in the Netherlands. It is part of the Natura 2000 European network of  protected areas which means the authorities have an obligation to maintain biodiversity.

Some 200 birds have been imported from Sweden since 2012 but their number has now dwindled to around 20, Paul ten Den of the forestry commission Staatsbosbeheer told local broadcaster RTV Oost.

Ten Den said the birds are dying because there are too few insects and that they are picked off by hawks. ‘There is too much nitrogen in the environment and that affects the number of insects. Adult grouse eat pretty much everything, including pine needles but their young need insects and spiders,’ he told the broadcaster.

‘The area needs to be rejuvenated so insects will find it more attractive but that is a slow process,’ he said. Getting the grouse from Sweden meanwhile will buy time.

Opponents of the scheme, which costs some €300,000, said is a waste of time and resources.

‘It would be better to prepare the habitat for the grouse and then reintroduce them so they have a chance of survival,’ Gerrit Dommerholt of bird protection organisation Vogelbescherming Nederland said. ‘If that means the grouse becoming temporarily extinct in the Netherlands so be it.’

But this can only work if the authorities prioritise nature, Dommerholt said. ‘Farmers in the area have still not been told to adapt their farming practices. Nature has always come second,’ he said.

Provincial councillor Gert Harm ten Bolscher said the scheme would be evaluated in five years’ time. ‘But if it fails again we will have to consider giving up.’