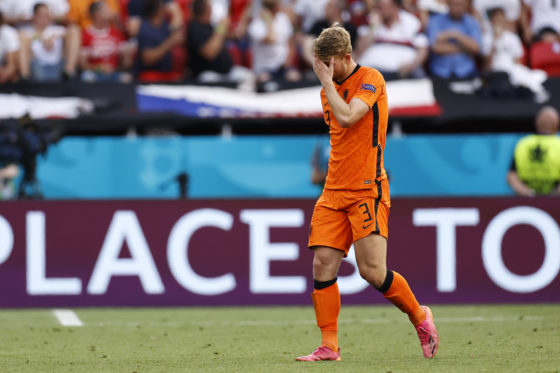 The Netherlands are out of Euro 2020 after losing 2-0 in the second round to the Czech Republic in Budapest.

The turning point of the game was a red card for defender Matthijs de Ligt after he handled the ball on the ground in the 55th minute.

Russian referee Sergei Karasev initially booked the Juventus defender, but after reviewing the incident on screen he decided De Ligt had denied Patrick Schick a clear opportunity to score and sent him off.

Moments earlier Donyell Malen had missed a chance to put the Netherlands ahead when he shot tamely at the goalkeeper after bursting through the defence.

The Czechs took the lead in the 68th minute later when Maarten Stekelenburg first fumbled a cross behind the goal-line and then misjudged the corner as Tomas Holes headed home.

Oranje’s opponents dominated after that as Oranje resorted increasingly to long balls, and sewed up the match when Patrick Schick slotted home his fourth goal of the tournament from Holes’s pass.

The Czech Republic will now play Denmark in Baku next Saturday for a place in the semi-finals.

Captain Georginio Wijnaldum said the red card left the Dutch with an uphill struggle, but acknowledged that the team was struggling even in the first half.

‘We created a few chances in the first half but it wasn’t enough,’ he told NOS. ‘We had one good chance in the second half that we didn’t take and then we switched off for a moment and [that led to] the red card.

Before the tournament we felt very positive and we played well in the group stage, but today was an off day.’

Manager Frank de Boer said he believed Oranje were the ‘dominant team’ in the first half, but failed to convert good chances for Malen and Denzel Dumfries. ‘But you know that against such a tough opponent you have to be on top of your game and we weren’t,’ he said.

De Ligt said he felt his red card had made the difference in what was ‘a 50-50 contest’.

‘We had the game under control and then we got an awkward ball,’ he said. ‘I let it bounce, which in hindsight was a bad call. Then I fell to the ground and got a slight push which led to the handball.

In the end, it changes the game. It’s that simple and I shouldn’t let that happen. I saw how the team fought in the closing minutes and I can only be proud of the team, but that makes me feel very responsible.’

There was controversy before the game when Hungarian police were reported to be confiscating rainbow flags from Dutch fans in the fan zone outside the Ferenc Puskas Stadium.

Uefa said the rainbow colours were welcome in the stadium, but despite flags being handed out at Schiphol airport they were conspicuous by their absence in the crowd, although several advertisers included the flag in their pitchside displays.

One fan, Sjoerd van der Meijden, told Hart van Nederland his flag had been confiscated by security guards in the fanzone. ‘They told me it would cause a fight and I’d be beaten up, so I needed to get rid of it.’

UEFA insisted that it had not banned rainbow banners in the fanzone or the stadium, ‘contrary to some reports in Dutch media’.

UEFA today informed the Hungarian Football Federation that rainbow-coloured symbols are not political and in line with UEFA’s #EqualGame campaign, which fights against all discrimination, including against the LGBTQI+ community, such flags will be allowed into the stadium.