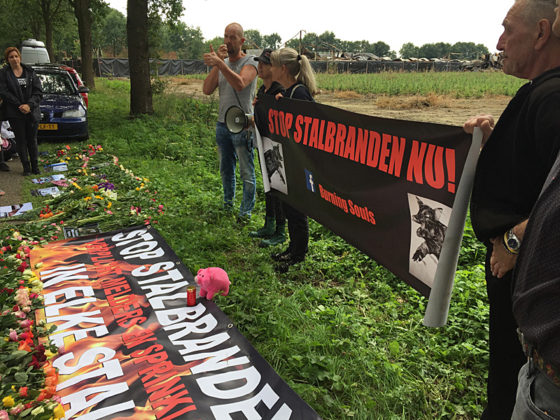 Animal rights organisations have again renewed their call for better fire safety on factory farms after two fires this month led to the death of thousands of animals.

‘We have been saying for years that the measures taken are far too minimal,’ Animal Rights spokeswoman Kristel Grond told Nu.nl. ‘We can talk about fire alarms and sprinklers, but they are just quick fixes. The only real solution is the end of the livestock industry, and closing mega barns is the first step.’

Animal rights lobby group Wakker Dier, which campaigns against cheap meat, says farmers are reluctant to spend on safety because they want to supply meat to supermarkets at bargain prices.

‘The sad thing is that farm minister Carola Schouten is going along with this,’ spokesman Kenny Oostrik said. ‘She says some measures should be taken, but that they are too expensive.’

Wakker Dier says the law needs to be tightened up to force farmers to comply with better safety standards. In particular farmers should be required to install flame resistant walls, fire hydrants and fire alarms, the lobby group says.

So far this year there have been eight reported barn fires in the Netherlands according to the Wakker Dier monitor.

In 2018, the government said it would not force farmers to take further measures to prevent fires breaking out because of the cost of the investment. The current measures do not include compulsory lightning conductors and sprinkler systems.

In March, the Dutch safety board OVV said that the Dutch government is not doing enough to reduce the number of barn fires, and that the government considers the death of 130,000 chickens to be an ‘acceptable risk’.