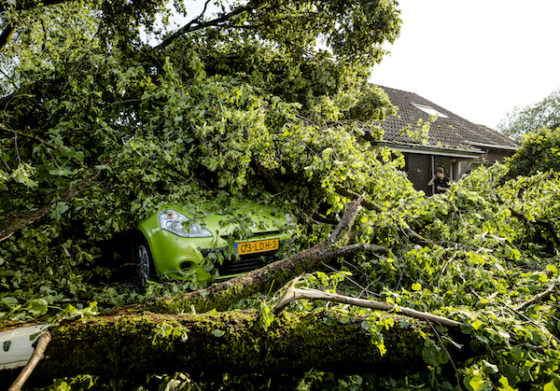 Friday afternoon and evening’s storms caused damage and flash flooding as they moved northwards across the Netherlands.

In Leersum, east of Utrecht, nine people were injured when a whirlwind hit the village and two had to be taken to hospital. ‘It was crazy,’ local Ronald Steunebrink told RTV Utrecht. ‘Windows banged open, hail came inside and the wind tore through the house.’

The wind brought down dozens of trees, pulling up cabled as it did so, and causing gas leaks in at least seven places. The cleaning up process was hampered because there was so much debris on the roads.

In Oldebroek in Gelderland, four electricity pylons were brought down in the wind, with cables landing on a farm and a public road. In Tiel, a block of flats was evacuated after part of the roof was blown off and a large construction crane was blown over, injuring the driver.

There were problems in Noord Holland, with flash flooding in Alkmaar. In The Hague, several streets were also flooded because the drains were not able to cope with the pressure of the rainfall.

Saturday and Sunday it will be overcast in the west, and cooler than in recent days,  although the sun may break through later. In the east and south it will be mainly sunny, with temperatures in the mid to high 20s.