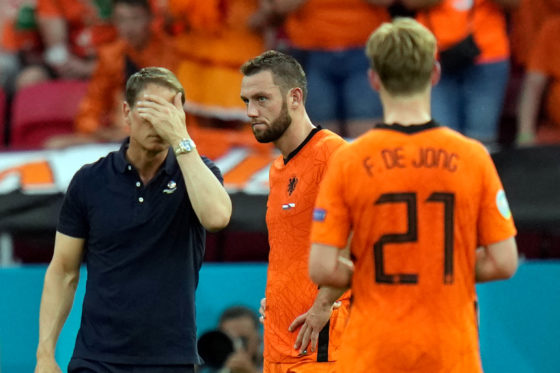 Frank de Boer has said he will decide in the next few weeks whether to continue as national team coach following the Netherlands’ dramatic exit from Euro 2020.

Dutch media were savage in their judgment of De Boer after his team fell apart in the second half against the Czech Republic, who won 2-0. Defender Matthijs de Ligt was sent off after 55 minutes for handling the ball on the edge of the penalty area.

‘I don’t need to answer that now,’ De Boer said at the post-match press conference when asked if he wanted to stay on. ‘I’m going to think about it quietly first, but right now I’m still full of emotion. This isn’t the time to make decisions.’

‘This is an downright failure for this team, with the quality we have in this group of players,’ the Telegraaf’s chief sports writer Valentijn Driessen said after the debacle in Budapest.

‘Frank de Boer has said he’ll consider his position and he needs to let this massive let-down sink in, but there isn’t much to sink in. It has to be the end of the road.’

De Boer did not say how much time he needed, but he is expected to make his decision before the Netherlands resume their World Cup qualifying campaign with a trip to Norway on September 1.

AD described the match as a ‘massive hangover after the Oranje street party.’ Football writer Sjoerd Mossou wrote: ‘Against a team with no international stars Oranje totally went to pieces.

‘After the red card they were totally outclassed, but even before half-time the Dutch team weren’t up to standard.’

In the Volkskrant, Willem Vissers said De Boer’s team had ‘squandered the identity of a unique footballing nation.’ ‘The impression of sweeping attacks, domination, wing play, intricate build-up. All these gems were traded in for stodgy hit-and-hope football,’ he wrote.

NOS analysts Rafael van der Vaart and Pierre van Hooijdonk were scathing of the decision to bring on Quincy Promes for Donyell Malen in response to De Ligt’s dismissal, shortly after Malen had created the best chance of the game for the Dutch.

‘He brings him on and takes off our most dangerous man,’ said Van der Vaart. ‘And nobody on the bench says, you shouldn’t do that.’ Van Hooijdonk said: ‘You might call it an Advocaat move’, referring to Dick Advocaat’s infamous substitution of Arjen Robben in a 2004 European Championship match against the same opponents.

Foreign media outlets were just as bemused by the disintegration of the Dutch team after a strong group phase. ‘The cheeks of Oranje flushed red with shame,’ said Belgium’s Sporza. ‘The road to the final opened up for them, but they fell at the first hurdle.

‘For all their attacking verve, particularly in the first half, the Netherlands didn’t muster a single shot between the posts.’

‘It takes something to reach this stage of a tournament, and then produce this kind of mid-air stall,’ wrote the Guardian’s Barney Ronay. ‘But between the 54th and 68th minutes the Netherlands simply unravelled in Budapest, as a balanced goalless game transformed into a world of stumbles, flaps and panics.’