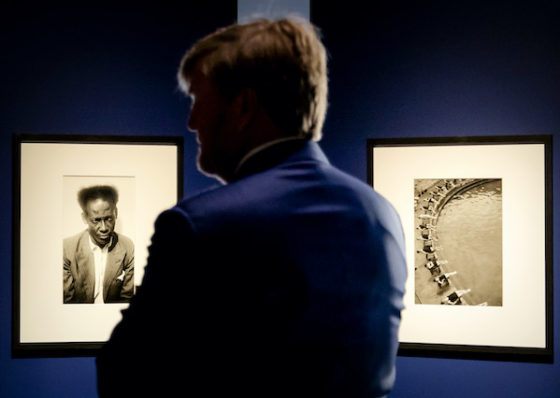 Among the photos that have acquired iconic status are the stark depictions of Rineke Dijkstra’s teens on the beach, and rapper Tupac photographed by Dana Lixenberg a few years before he died.

Represented too are famous Dutch photographers Ed van der Elsken, Viviane Sassen and Erwin Olaf whose style has become synonymous with their names.

Some of the images have become part of the national psyche, such as Anne Frank’s passport photos from 1939 and the ‘little boy with the pan’ taken by Emmy Andriesse during the last desperate winter of World War II.

‘Dutch photography is very rich,’ museum director Birgit Donker told broadcaster NOS. ‘When photography was invented people didn’t think much of it. But much later it came into its own as an independent medium. Now that photography has been ‘emancipated’ and everyone takes photos we thought it was time to bring together the 99 photos which best represent those 180 years of images.’

The criteria for including images in the listing were artistic quality and social and historical relevance an not all will be familiar to the public. There is for instance a Daguerrot type form 1846 depicting a black couple, and a photo of Turkish women on strike in Almelo.

‘We want to surprise the public and make them think: which photos did not fit the story as it was told. We expand and enrich that story and change people’s perspective,’ co-curator Guinevere Ras told the broadcaster.

Some of the story tellers were sisters Anna and Augusta Curiel who photographed plantations in Suriname at the beginning of the 20th century.

‘You see this very neat plantation, photographed from a high perspective. The misery that existed, the blood sweat and tears of colonialism, is, of course, invisible. That brings you to the question of who is holding the camera, who is in control. We are exploring which photographs should also have been taken and who should have had a camera in those days,’ Ras said.

Those photographs are represented by the blank space that is the 100th photo. It will be filled by visitors who can suggest other photos they think should form part of the canon, either their own or from photo history.

The interaction with the public is a good example of how museums are evolving, Ras said. ‘Instead of being temples to art they are becoming forums where we enter into a dialogue with the public,’she said.

However, no matter how emancipated photography has become it is not everyone who can capture that special moment, Donkers said. ‘Not everyone who photographs is a photographer. You need a special eye and a special gaze. I hope that too will become clear in the exhibition.’

The Eregalerij van de Nederlandse fotografie, which opened on Wednesday and welcomed king Willem-Alexander as one of the first visitors, will be on permanent show in the new wing of the museum.