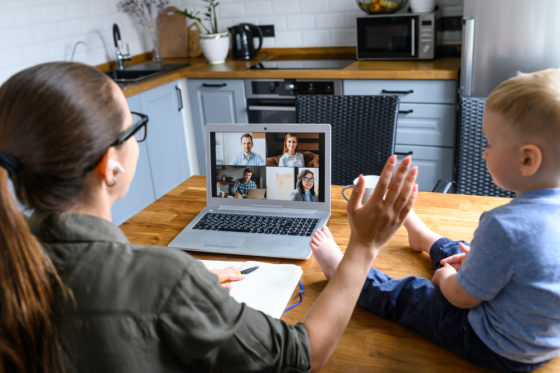 Over half of Dutch employers expect working from home will remain part of the job, combined with two or three days at the office, a survey by broadcaster RTL Z has shown.

This would be welcomed by at least half of the workers who have been operating from home during the coronavirus crisis, according to earlier surveys by Intermediair and job seekers site Nationale Vacaturebank.

Among the advantages most cited by workers were the lack of the daily commute, being better able to concentrate at home, and the opportunity to work according to their own timetable.

‘Creativity is not really helped by a Zoom call but routine jobs can perfectly well be done at home,’ PR manager Annerieke Kamphuis told RTL.

However, one in five employers are ready to go back to ‘the old normal’ and want staff to return to the office full time.

‘We as a team want to be back at the office. I have many young people on my team who live in small houses and who are reluctant to continue to work from home. The want to talk to each other in person,’ Michael Bouwens of facility management firm Bouwens& told the broadcaster.

The office environment will not be the same for many, however, with half of employers saying they have made changes. There will be more formal and informal meeting places and a fewer work spaces, for example.

‘I have reduced the number of work spaces. The office is getting a new function: a clubhouse where people come to share knowledge,’ Kamphuis said, ‘and we are also promoting ‘Work from anywhere’.

Working from another location, including abroad, is part of a growing trend among young professionals. ‘Employers who want to hold on to valued staff will have to facilitate their wish to work from a place of their choosing for a time, even if that means a lot of administrative hassle,’ Baker McKenzie lawyer Don-Tobias Jol told the FD.

Jol, who advises multinationals about the tax and other implications of having an international workforce, said that the trend is now so pronounced that many companies are changing their policies.

‘The competition is doing it and so they can’t say no. The move is mainly from the north to the south of Europe, to Greece or Italy from Denmark and Germany, countries where it rains a lot,’ Jol said.

A Unilever spokesman told the paper that people who have certain skills could be allowed to work from abroad more often but that the trend will be mainly national.

‘It can be done, that much Covid has made clear,’ the spokesman said. ‘But if we are going to work from home for a couple of days a week, more people who work in Rotterdam will opt to live a long way from the city.’