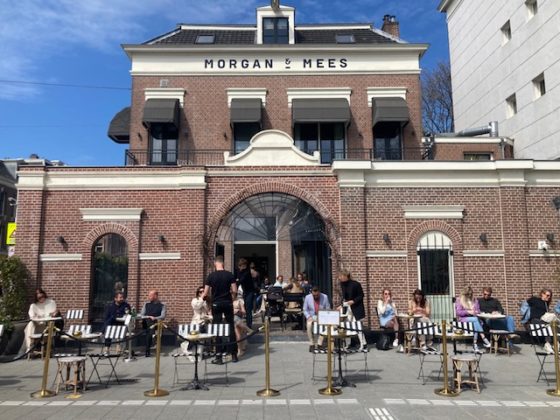 If anything has become symbolic of the gradual easing of the coronavirus regulations in the Netherlands, it was the government’s decision to allow pavement cafes to reopen for six hours a day from the end of last month.

The national obsession with een terrasje pakken, or grabbing a seat on a terrace, is such that even prime minister Mark Rutte, when asked at a press conference if he had been looking forward to a pavement cafe beer, said that he, like everyone else, certainly was. (Just make that a glass of wine or a ‘nice’ cappuccino, he said)

That the prime minister was asked about outdoor drinking at a press conference devoted to the state of the country’s coronavirus epidemic highlights just how important this specific aspect of urban café culture is in the Netherlands.

‘There’s an obsession with it,’ says Dennis Kaandorp, owner of Arie, a new bistro in Amsterdam’s de Pijp neighbourhood whose terrace has been packed since opening day. ‘I think it’s because of the climate. When spring comes, everyone gets that feeling that they want to go outside again. We feel we deserve it after the winter.’

Covid restrictions have only increased that feeling of entitlement. After the sunny spell that seemed to bless the Netherlands during lockdown, the rain and the temperature started to fall as the country’s terraces reopened.

But that didn’t deter pub crawlers, including 32-year-old teacher Britt, who was drinking beer with her friend Karin on Arie’s windy terrace. ‘I probably wouldn’t have gone to a terrace in this weather two years ago,’ she says. ‘But after six months, we would have gone today even if it was pouring!’

‘They say there is no bad weather in the Netherlands,’ adds Kaandorp. ‘Only bad clothes. We just need warmer jackets because we need to sit outside.’

To see and be seen

But it’s not just the weather or lockdown that explains the Dutch obsession with terrasje pakken. ‘In Amsterdam, I think people want to show off a bit,’ says Britt. ‘I’m not one of those people, but I do want to socialise.’ 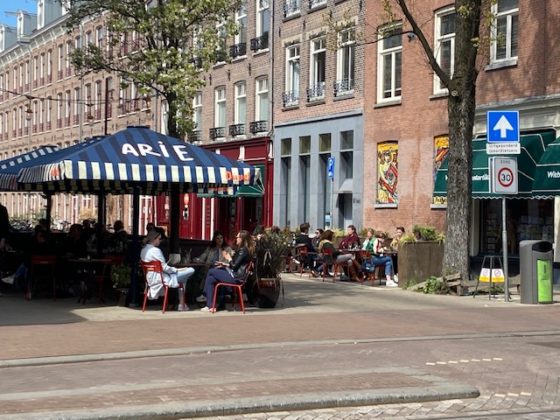 Making the most of the space in the Pijp. Photo: Lauren Comiteau

Consider it an extension of the very Dutch open-curtain, nothing-to-hide ethic. ‘People want to look at each other,’ says Kaandorp. ‘They want to sit outside and see what their neighbours are eating and doing. When you’re sitting on a terrace, you’re looking out and not missing anything. And people walking by are looking in.’

But it hasn’t always been this way. ‘Terrace culture is not typically Dutch,’ says Erasmus University sociologist Mark van Ostaijen. ‘In this former Calvinist country, expressing a hedonistic lifestyle in public spheres was not the norm. You didn’t show off on terraces.’

That was in the 1950s and 60s, when the sober Protestant ethic was still the rule of the day. But with labour laws instituting a 40-hour working week and Saturdays off, suddenly leisure time was available to the masses. Add to that the rise of the leisure economy in the 1970s and 80s—and the re-urbanisation and increasingly consumer culture of the 1980s and early 90s—and canal-side imbibing is the new norm.

‘We can now sit on a terrace and we don’t have to be reluctant to show we have free time and leisure and can consume it as a luxury good,’ says van Ostaijen. The rise of the terrace-side selfie has replaced the old reluctance to publicly flaunt wealth.

‘The start of terrace culture in the Netherlands only goes a few decades back,’ agrees a spokesperson for KHN, the organisation representing the Dutch hospitality industry. ‘It most likely started in the southern part of the Netherlands – Maastricht – in the “Burgundian south”.’

But Van Ostaijen says you have to head much further south to get to the terrace trend’s true roots. ‘Terrace culture is a Mediterranean phenomenon,’ he says. ‘It’s an Italian and Spanish way of life that’s now trickling down to us, but it comes from somewhere else.’ 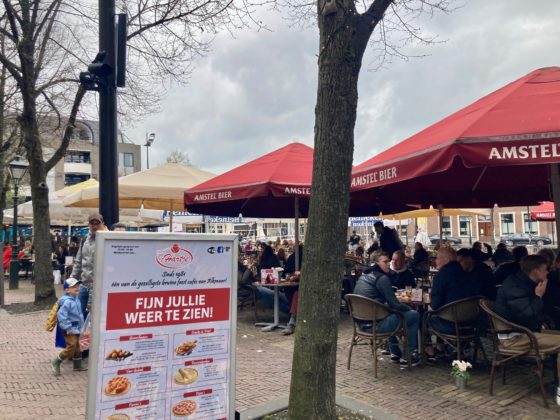 A cafe in the rain in Alkmaar. Photo: DutchNews.nl

‘Terraces may not have started in the Netherlands, but they’ve definitely come of age here,’ says Vladimir Lojen, a Croatian who calls the Netherlands home. ‘In the Balkans, no one sits on terraces in the rain or cold. They can wait for the sun they know will come. But here we take it when we can.

‘I also think terraces are better suited here for blocking out rain and wind with their big umbrellas and awnings. Especially since smoking was banned indoors about a decade ago [2008], the terraces really geared up to accommodate smoking patrons.’

Arie owner Kaandorp says Amsterdam these days has more of a terrace culture than some of our southern neighbours. ‘When you go to Spain, people want to have dinner inside with air conditioning,’ he says. ‘Tapas bars are always small and indoors. Here, especially in Amsterdam, people want to sit outside.’

Civil servant Andreja, from the Croatian island of Krk, agrees. ‘In Croatia, people go to terraces to have coffee, smoke and gossip. Here it’s more upper class, and people eat with their drinks.’

TV producer Ruben enjoyed his first terrace beer in over a year last week at de Tulp on Amsterdam’s Heinekenplein. It was a bit windy, he says, but the weather was ‘good enough.’

‘My friends and I waited for an hour to get in,’ he says. ‘And I wondered why I would wait that long to pay €10 for a beer that I can buy for €1 in the supermarket a few meters away and drink right there on the square. But still, I waited! It’s very strange.’

In the meantime, everyone has their own reasons for keeping terrace culture alive. 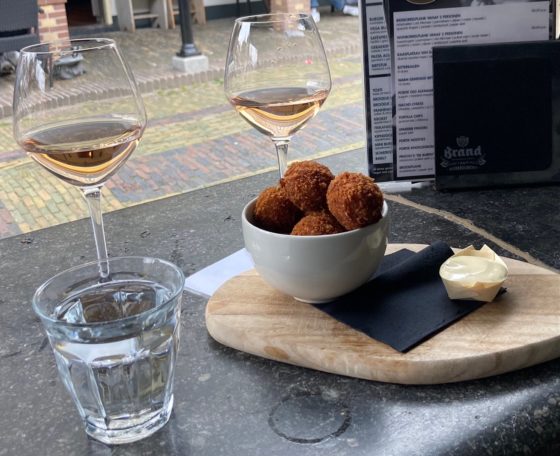 ‘I need a chair,’ says Andreja. ‘And we really wanted to drink a Guinness from the tap. You can’t get that in a bottle.’

‘I want to support local businesses and keep economic life alive, which is actually a very Dutch thing to do,’ says Ruben.

‘Sitting in this chair is better than sitting on that square there because of the service,’ says Arie owner Kaandorp, pointing to a grassy area. ‘And that’s why you are willing to pay €5 for a beer. You’re also paying for the smile it’s served with. That’s the whole point of a terrace.’

‘I would go because it’s also a place to see soccer matches and Ajax games,’ says Karin. ‘I can’t watch them on my TV, and it’s nice to drink beer with friends or teammates and watch games.’

But for the moment, the terrace may play an even more important role. ‘It has an enormous symbolic value,’ says van Ostaijen. ‘People are sitting outside, and you can publicly see it. That creates relief. Even if you’re not on a terrace, it shows you we’re going in a different direction, decreasing restrictions and that things are getting better.’