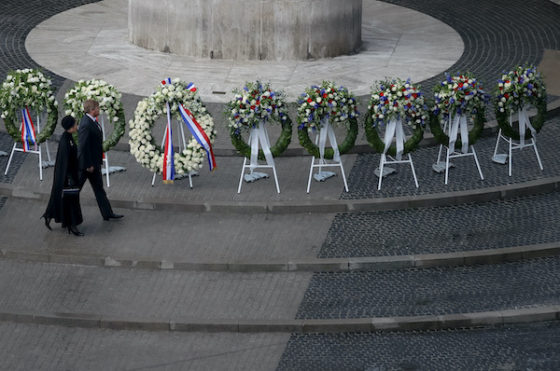 The king and queen walk past the wreaths. Photo: Remko de Waal ANP/Pool

The Netherlands remembered its World War II dead on Tuesday, with commemorations at war memorials nationwide.

The day of remembrance culminated in two minutes’ silence on the Dam in central Amsterdam, where king Willem-Alexander and queen Maxima laid a wreath.

Other wreaths were laid for members of the resistance, ordinary citizens who died, soldiers and merchant navy sailors.

On Dam Square, where about 100 invited guests attended the ceremony, prize winning spoken word artist Amara van der Elst told of descending from two different cultures, and of ‘the wounds beneath the skin that do not heal’.

Comedian and actor André van Duin spoke about growing up in Rotterdam in the aftermath of the World War II and about attending Remembrance Day commemorations at the Homo Monument close to the Dam.

‘The fact that we have had such a monument since 1987, as the first people in the world, is a symbol of our freedom,’ he said. ‘The freedom that everyone can be themselves. Everyone, without others having anything to say about it.’

‘I too,’ he said, ‘am responsible for passing that freedom on to the next generation.’