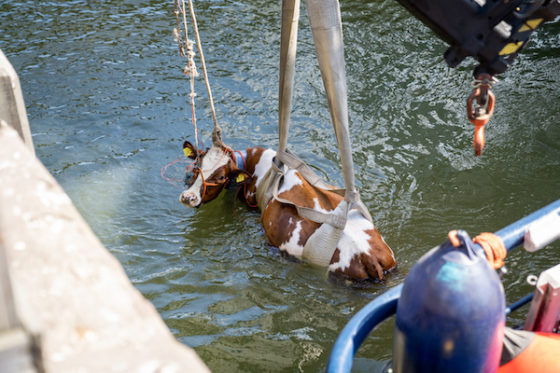 The cow is winched out of the water. Photo: ANP / Hollandse Hoogte / MediaTV

Concerns about animal welfare have again been raised after two cows on an experimental ‘floating farm’ in Rotterdam’s harbour fell into the water.

The local Partij voor de Dieren, which campaigns for animal rights, told DutchNews.nl that it had tried and failed to get a majority in the city council to withdraw the farm’s operating permit, calling the project ‘madness’.

In 2019, the experimental farm opened in Rotterdam harbour, claiming to be the world’s first floating platform housing a herd of cows and a dairy, and generating headlines around the world.

It aims to be ‘sustainable’, recycling the animals’ waste on site, and giving an example of urban farming that could produce more food within cities of the future.

But the PvdD, which has long opposed the experiment, has started a social media campaign raising its concerns about animal welfare, after a second cow fell into the water and had to be rescued on King’s Day. It is believed that the animal was crossing from the floating platform to a small area of grassland for the cows on the dockside, and could not climb out.

Ruud van der Velden, a councillor and head of the local branch of the PvdD, told DutchNews.nl that the experiment was a ‘sorry sight’ and he was concerned that cows could fall in the water again.

‘It is dangerous when cows leave the pontoon for the gangway to go to the waterside and this is the second time that a cow has ended up in the water: the last was in December,’ said Van der Velden.

‘On Tuesday there was another accident with a cow falling into the water, an animal of 600 to 800 kilos, the emergency services were called and it took them more than an hour to get it out of the water.

‘I called for a debate in Rotterdam council and for a stop on the floating farm by withdrawing its permit, but the motion didn’t get a majority. But a cow doesn’t belong on the water and intensive dairy farming isn’t right for cows either.’

He said that there had been positive responses to his party’s social media campaign raising awareness of the cows: ‘A lot of people think it’s really strange that this exists. It’s not their natural environment, standing on a pontoon in an industrial harbour surrounded by walls. It’s a sorry sight to see.’

But Peter van Wingerden, chief executive of Beladon, the company behind the project, said that the cows were ‘doing great’ and that animal welfare was high on their agenda. He pointed out that cows do fall into the water and have to be rescued by farmers on regular farmland too.

‘Last Tuesday a cow fell in the water because a young volunteer left the fence open [and the] same happened last year with a little calf when some visitor left another fence open,’ he told DutchNews.nl.

‘Cows can (like all animals with four legs) swim perfectly. When it happened on Tuesday morning, another volunteer who did not have a clue about that immediately called 112. Within four minutes, five cars from the fire-brigade were at our farm, two diving teams, the port boats and lots of journalists.

‘The fireman told me that this [rescue technique] is for them good to learn because this is the new way of sustainable farming in times of climate change. Until now they have only rescued cats from trees in the city.’

He added: ‘We are one of the animal friendliest farms in The Netherlands, and maybe even Europe.’

DutchNews.nl has contacted the Rotterdam council head of regulation for a comment.