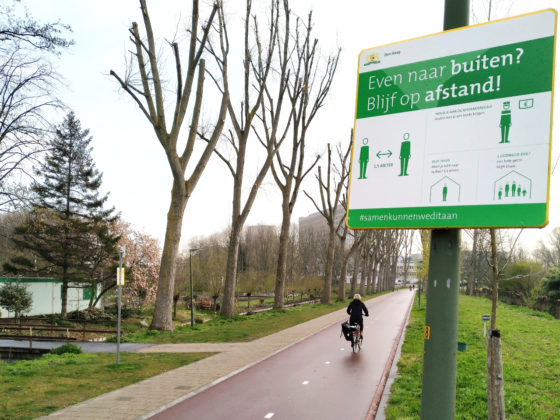 The number of coronavirus cases fell by 5.5% in the last seven days, but the proportion of positive tests rose for the sixth consecutive week.

The decline in positive tests has not yet relieved pressure on hospitals, where more than 2,600 people are being treated for Covid-19. However, admissions to hospital fell by 7.9% while the number being transferred to intensive care was unchanged from the previous week.

The latest weekly bulletin by the public health agency RIVM shows infections and hospital admissions are increasingly concentrated in the unvaccinated younger age groups. Cases increased in the 15 to 30 age group, with the 20 to 24 bracket surpassing the peak of the second wave, with 554 infections per 100,000 people.

By contrast, infections in the oldest age groups have declined steadily since January. In the 80-84 population there were 59 infections per 100,000 last week, compared to 351 at the end of December. 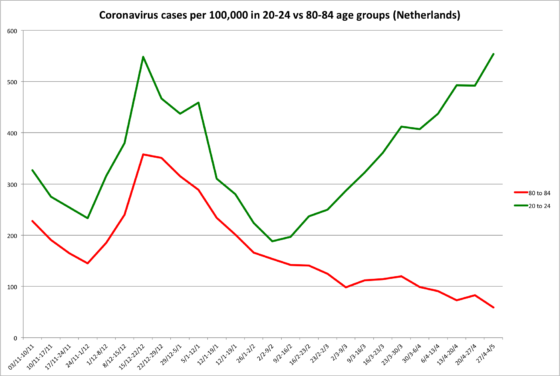 The RIVM said it was concerned about the rising trend in the number of people aged 40 to 59 being taken to hospital with Covid-19, which has almost doubled since the beginning of March. People in this age group are particularly susceptible to so-called ‘long Covid’, where symptoms such as fatigue, breathlessness and ‘brain fog’ last for months.

In the last week another 1,633 coronavirus patients were admitted to Dutch hospitals, down from 1,774 the previous week, but the number currently being treated is virtually unchanged from a week ago at 2,613.

The Outbreak Management Team has advised the government that restrictions should not be eased further until the figure has dropped by 20%. 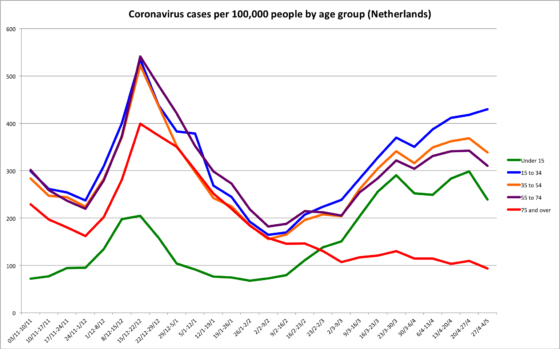 There were 377 admissions to intensive care, two fewer than the previous week, while the total number of patients is currently 818, also two below last Tuesday’s number.

Another 128 deaths from Covid-19 were reported in the last seven days, one fewer than the previous week.

The positive test rate increased from 10.6% to 11.7%, the highest level since the end of January. Fewer tests were carried out partly because of the King’s Day public holiday, while technical issues at the weekend left some local health boards unable to book tests. 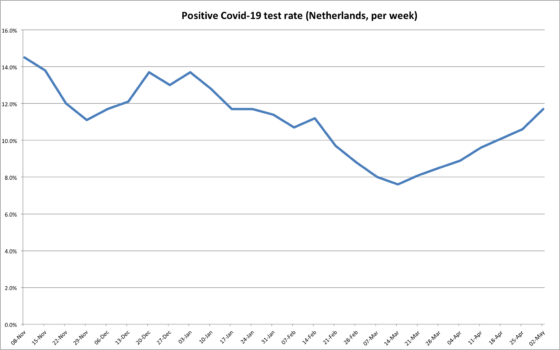 The latest daily figures, which include a partial correction for the weekend disruption, showed another 7,830 cases were reported in the 24 hours to Tuesday morning.

The latest calculation of the reproductive number R, dated April 19, is 0.94, down from 1.05 the previous week. If the number is below 1 it indicates the virus is in decline.

Around the 25 health board (GGD) regions infections per 100,000 people range from 180.5 in Drenthe to 438 in Brabant-Noord. Seventeen areas are above the 250 mark, classing them as ‘very severe’ on the government’s four-step scale. No region is close to the benchmark of 27 hospital admissions per 100,000 people per week which would allow it to move down from level 4 (very severe) to level 3 (severe). 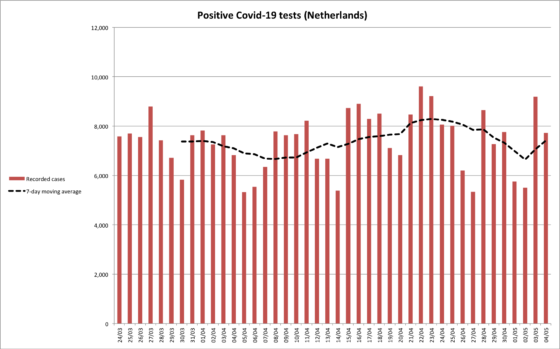