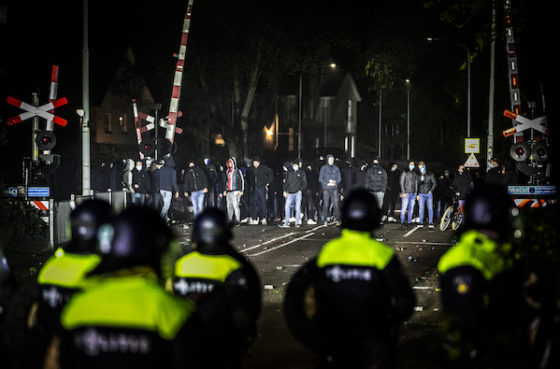 Riot police were drafted in to break up trouble outside the De Graafschap stadium in Doetinchem on Wednesday evening, after the club failed to qualify for promotion to the Eredivisie.

De Graafschap needed a win against Helmond Sport to automatically move up to the premier league, but could do no more than a 0-0 draw. That meant Deventer club Go Ahead Eagles took second place in the Keuken Kampioen division on goal difference and gets the automatic promotion.

Hundreds of fans had gathered outside the stadium during the game, despite the mayor’s appeal to stay away, and trouble broke out after the match was over. The Helmond Sport players bus was prevented from leaving for a time and it was not until after midnight that order was restored.

In Deventer, hundreds of supporters gathered to welcome back their team, despite the coronavirus restrictions. A spokesman for the city council said police saw no reason to intervene and that the celebrations, which went on until well after midnight, were mainly peaceful.

Cambuur Leeuwarden, as winners of the Keuken Kampioen first division, have already qualified for promotion to the Eredivisie.