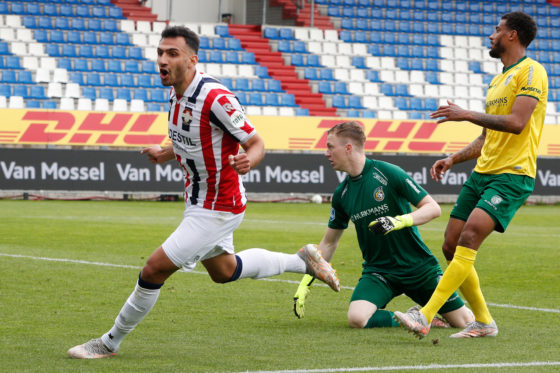 Willem II secured their place in next season’s Eredivisie with a 2-1 win over Fortuna Sittard, consigning Emmen to the end-of-season play-offs.

Vangelis Pavlidis put the Tilburgers ahead with a fabulous dribble past four defenders and chipped finish just before half-time. Zian Flemming levelled the scores three minutes after the break with a shot from outside the penalty area, but Sebastian Holmén’s shot from a corner on 67 minutes proved decisive.

It meant Emmen’s 4-0 win at already relegated VVV Venlo was a purely cosmetic exercise as the Drenthe club finished behind RKC Waalwijk, who lost 3-0 at Feyenoord, on goal difference.

Emmen’s 16th-placed finish, thanks to a late-season charge after they failed to win any of their first 23 matches, means they now face NAC Breda in the play-off semi-finals on Thursday. The winners of the competition will play in the Eredivisie next season.

In the only other unresolved contest on the final day, Sparta Rotterdam took the final spot in the play-offs for the UEFA Conference League thanks to a 2-1 win at Heerenveen. Early goals by Lennart Thy and Wouter Burger, the latter firing in from long range, put Henk Fräser’s side in the driving seat, but they endured a nervous finish after Siem de Jong reduced the arrears midway through the second half.

Sparta now face Dick Advocaat’s Feyenoord side in De Kuip, while Utrecht play Groningen in the other semi-final. Utrecht ensured home advantage by holding second-placed PSV to a 1-1 draw as their northern rivals, who were again without their talisman Arjen Robben, went down 1-0 in Zwolle.

Ajax took 12 minutes to notch up their 100th goal of the season when Sébastian Haller converted Jurgen Ekkelenkamp’s pass. Further strikes from Antony and Lisandro Martinez enabled the champions to finish with a 3-1 win at Vitesse.

Third-placed AZ enjoyed the biggest win of the afternoon and their seventh straight home victory as they overpowered Heracles 5-0, with two goals each for Myron Boadu and Jesper Karlsson and a tap-in by Owen Wijndal after his penalty kick was saved.

Bottom side ADO Den Haag looked to be on their way to a consolation win in Enschede when John Goossens scored direct from a corner and then lashed in a 25-metre shot to give them a 2-0 lead after 38 minutes. But Twente were level by half-time through  a tap-in by Daan Rots and a Luciano Narsingh penalty.