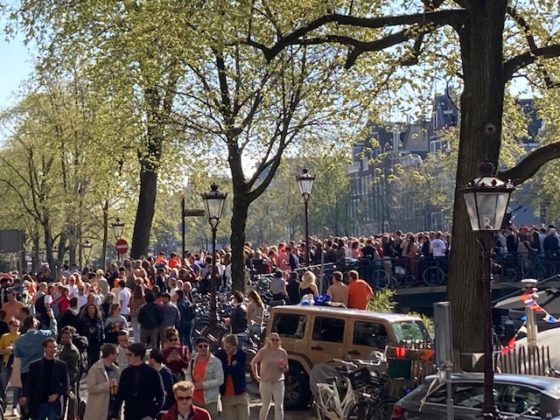 Thousands turned out to party in central Amsterdam

At least 483 people picked up coronavirus during the King’s Day festivities in Amsterdam, the local health board has confirmed to broadcaster NH Nieuws. The true figure is likely to be higher because not everyone who is a potential carrier has had a test, the GGD said.

The virus was spread across at least 17 clusters and four in five of the infections were picked up indoors, the GGD said. In addition, 60% of the people who were infected had been in a large group in the city centre or a park at some point during the day.

Three-quarters of the new infections involved people aged 19 to 30 and most of them lived in the region. Just one Kings Day cluster involved people who had come to Amsterdam from elsewhere for the day, the GGD said.

Amsterdam council ended up urging visitors not to come to the capital to celebrate King’s Day because the city was ‘too full’ as the sunny weather drew thousands of people to the city centre streets and waterways, despite the official limit on groups.

In the afternoon, officials closed the Vondelpark to new arrivals because so many people had flocked to the park in the spring sunshine. Later in the day, the Sarphatipark was also shut.

Amsterdam’s health board is also looking to identify how many new infections can be traced back to the impromptu party to celebrate football club Ajax’s league title. Some 12,000 fans turned up at the Johan Cruijff arena to party after the victory.