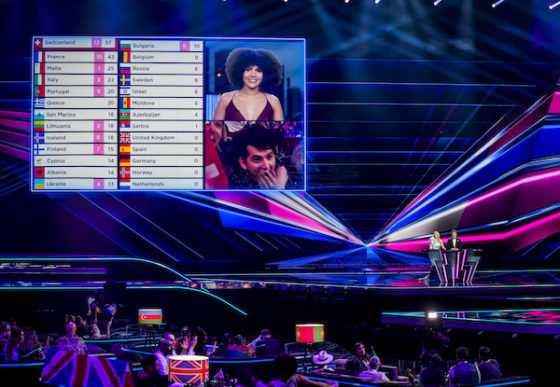 Some 5.4 million people in the Netherlands tuned in for the final of the Eurovision Song Festival in Rotterdam on Saturday night, which was won by Italian rock favourite Måneskin with Zitti e buoni.

Last year’s event was cancelled due to coronavirus, but this year officials decided it could go ahead at the Ahoy concert venue in front of 3,500 fans, all of whom had to show a negative coronavirus test to attend.

‘Everyone is decked out in flags and costumes with loads of glitter,’ fan Deuss told broadcaster NOS before the start. ‘The atmosphere is happy and optimistic. People feel they are the lucky ones.’

The Dutch papers were full of praise for the organisers – who had brought back previous winners to perform on Rotterdam rooftops as part of the show.

The song festival was ‘the first big international cultural event to which visitors had been physically allowed since the start of the pandemic,’ the Volkskrant pointed out, before going on to describe the staging as ‘memorable’.

The NRC praised the ‘oiled’ performance of the four Dutch presenters. ‘It was warmer and more witty than other festivals,’ the paper said. The Telegraaf said the Netherlands can be ‘proud’ of the event.

Producer Sietse Bakker said that he was ‘relieved that we have been able to keep nearly everyone healthy’.

There were no big coronavirus outbreaks and of the 24,400 tests carried out on performers and crew, just 16 were positive. However, the Icelandic entry was hit by the virus, as was the 2019 Dutch winner Duncan Lawrence, who was unable to hand over the trophy to this year’s winners.

In total Italy was given 524 points: 206 by the jury, 318 by the television viewers. France was second with a total of 499 points and Switzerland was third with 432 points. The Greek entry, performed by Dutch Greek teenager Stefania, ended in tenth place in a tie with Bulgaria.

The Dutch entry, Birth of a New Age, by Jeangu Macrooy finished in 23 place out of 26, after receiving no points in the public vote and 11 from the professional juries. Britain came bottom of the ranking with no votes from any of the juries.

‘Of course it is disappointing not to end well, but it was an adventure and I am so happy,’ said Macrooy, whose Surinamese roots were a key part of the performance. ‘This was a real dream come true.’

Meanwhile, the Eurovision organisers say they are looking into suggestions that the Italian singer Damiano David may have taken cocaine during the show after tv footage showed him ducking his head to the table for a couple of seconds.

The band issued a statement on Instagram Stories denying the allegations and saying they were ready to be tested.