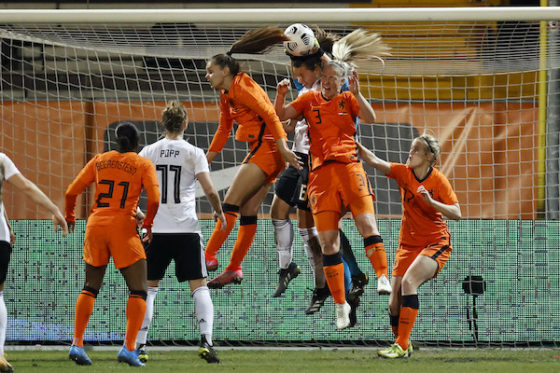 The Dutch football association KNVB has given the green light for talented female players to join men’s teams at the highest level of the amateur game.

From next season, female players will be able to play for their club’s top men’s team, including those in the A category, the KNVB said. The decision, the association said, is a ‘historic moment for amateur football in the Netherlands and worldwide.’ Until now, mixed teams have only been an option in youth and lower level adult teams.

‘Given the spirit of the times and recent research, we don’t see any reason to stick to [men only] teams and are going for equality and diversity,’ the association’s amateur game director Jan-Dirk van der Zee said.

‘We want to offer girls and women a place in the football landscape based on their qualities and own ambition.’

The KNVB has already run one experiment. This season, Ellen Fokkema was given special dispensation to play for Frisian fourth division team Foarut.

Even though only seven matches have been played because of coronavirus, the trial has been positive, the KNVB said.

Men will not be allowed to join the women’s competition.

11 things you need to know about Dutch women’s football

Women’s football became part of the KNVB’s remit in 1971 and in 1986 the association allowed mixed teams up to the age of 12. The age limit was extended to category A youngsters in 1996.

By sanctioning mixed football, the KNVB says, girls in small villages and towns where there may not be enough female players are now able to take up the sport.