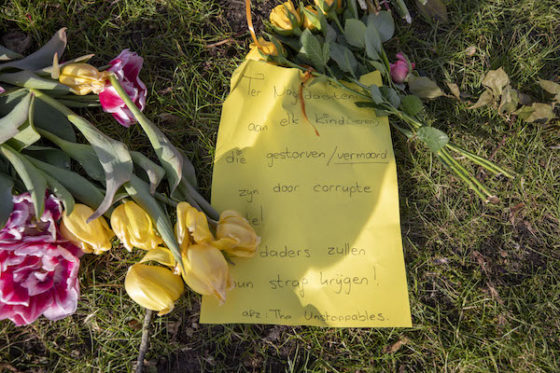 A Dutch local authority is taking legal action against three people who for spreading claims that ‘satanic ritual child murders’ took place within its boundaries in the 1980s.

The rumours have led to the town cemetery being overwhelmed with flowers laid by conspiracy theorists, upsetting the relatives of children who are buried there, as well as threats against local officials.

Last week officials in Bodegraven-Reeuwijk warned they would take legal action against the three, if they did not remove all the claims they had made from social media. The three, all men, have not done so, hence the decision to take them to court. Two of the men live abroad.

All three are now being charged with disturbing the peace, at least, but the council has declined to say any more about the case ahead of formal investigation.

Since February dozens of bunches of flowers and notes have been left on the graves of children in the cemetery, prompting the council to bring in permanent security. The flowers are also removed at the request of relatives.

One of the three suspects is known as Joost Knevel, who lives in Spain. He claims to have recovered memories of witnessing children being murdered in Bodegraven and of being sexually abused by Jaap van Dissel, now head of the public health institute RIVM.

A second man, Micha Kat, described by the Volkskrant as ‘uncrowned king of the madhouse’ has been spreading the same stories. He currently lives in Northern Ireland and is already the subject of an extradition order in relation to an earlier case.

The third man, Wouter Raatgever, is a coronavirus activist who believes that the World Health Organisation is part of ‘the deep state’.