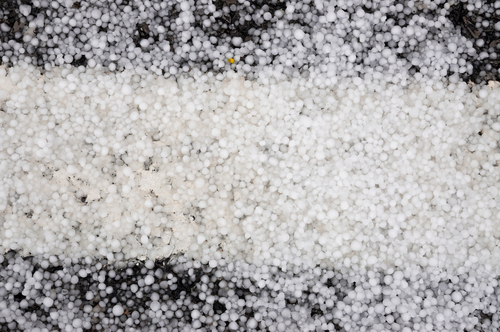 Hail on a road. Photo: Depositphotos.com

April is the cruellest month, wrote TS Eliot, but the onset of spring was exceptionally bitter in 2021, according to the Dutch meteorological institute KNMI.

The average temperature for April was the lowest for 35 years at 6.7 degrees, well below the seasonal norm of 9.9 degrees. In the 1980s the typical level for the month was 8 degrees.

There were 10 days when the thermometer at De Bilt, the KNMI’s headquarters, remained below 10 degrees all day and on April 6 the maximum temperature was 5.7 degrees, making it the coldest April day since 2013.

It was the first year since 1997 that the temperature at De Bilt did not rise above 20 degrees during the entire month of April.

Despite the cold, it was an unusually sunny and dry month, with 224 hours of sunshine compared to an average level of 196 hours and 38mm of rain, slightly below the seasonal norm of 41mm.

Temperatures of more than 20 degrees were recorded just five times at the regional weather stations, with 20.6 degrees in Maastricht on April 1 and at four locations on April 28, including 20.9 in Arcen.

It was also a month of frequent frosts, with the temperature dipping below zero 18 times in Eelde, Drenthe, close to the record of 20 frosty nights set at the same location in 1917.

The weather is expected to stay relatively cold until the end of the week, but southern areas could see temperatures as high as 25 degrees on Sunday.