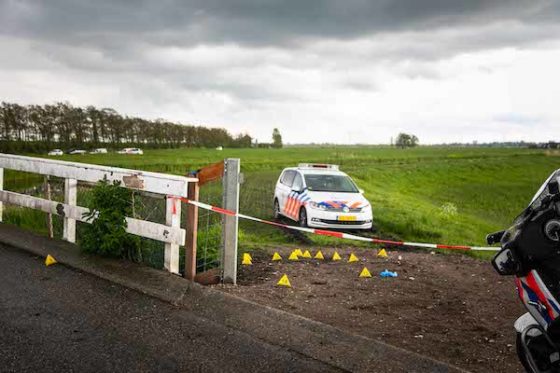 Bullets were sprayed throughout the chase. Photo: Laurens Bosch ANP

Six men have been arrested and one shot dead by police after an attempted armed robbery on a van transporting gems and precious metals turned into a car chase to Broek in Waterland, north of Amsterdam.

The suspects, some of whom were arrested after trying to flee across the fields, are said to come from France and Belgium, while according to the Telegraaf the contents of the Brinks lorry were worth around €50m.

Five of the suspects were picked up on Wednesday afternoon and a seventh man was arrested by heavily armed police driving a BMW near Rotterdam on Wednesday evening.

Eyewitnesses in Amsterdam Noord, where the attempted robbery took place, told broadcaster NOS that the van made a weekly delivery of gold to a smelters for reprocessing.

What exactly happened is still being pieced together, but according to NOS while the robbery was in progress, one of the men, dressed in black and wearing a balaclava helmet, paced to and fro in front of the building, firing warning shots from an automatic rifle in the street.

The street, they said, was busy with cyclists and people heading for the nearby supermarkets.

Several escape cars then drove off at high speed, seconds before the police arrived after receiving ‘very many emergency calls’.

Police gave chase to the getaway cars which headed not for the city’s ring road but for the provincial highway to Broek in Waterland.

Ten police vehicles were involved in the chase, which ended in a field near Broek in Waterland where five of the robbers made off on foot, after setting two of the getaway cars on fire. They were eventually picked up by police, by then reinforced with special armed units and a helicopter.

Two of the suspects were injured during the chase and were taken to hospital and one was killed. A police spokesman told AT5 later it was a miracle that more people were not injured by flying bullets.

Police said on Thursday afternoon they were still hunting for two suspects.