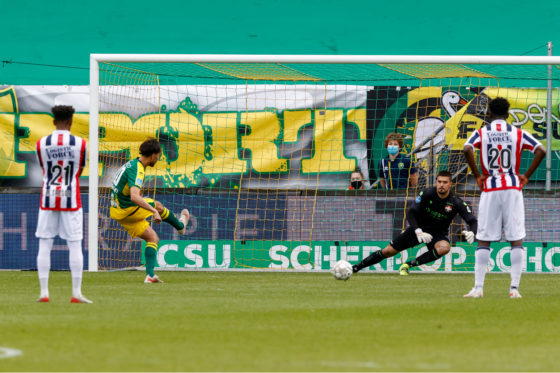 ADO Den Haag and VVV Venlo have been relegated from the Eredivisie on the second-last day of the season, while RKC Waalwijk all but guaranteed their place thanks to a 2-1 win against FC Twente.

ADO had kept their faint hopes alive with two wins in a row, but by half-time they were 3-0 down at home to fellow strugglers Willem II. Abdenasser El Khayati missed a penalty for ADO in the first half that would have cut the deficit to 2-1.

VVV faced a daunting task away to champions Ajax, who won the reverse fixture by a record 13-0 scoreline. It took just 10 minutes for Devyne Rensch to open the scoring for the home side and although Georgios Giakoumakis netted his 25th goal of the season in the second half, a 3-1 defeat sealed the Limburgers’ fate.

Willem II’s win in The Hague keeps them a point ahead of 16th-placed Emmen, who won 3-1 at home to Heerenveen. A hat-trick by Sergio Pena, including two penalties, ensured Emmen will at worst go into the end-of-season play-offs, while 34-year-old Lasse Schöne earned the first red card of his career for a heavy tackle on Emmen’s Jari Vlak.

RKC Waalwijk came from behind to beat FC Twente thanks to two goals early in the second half by Sylla Sow. RKC are three points ahead of Emmen but their far superior goal difference puts them effectively out of reach.

Emmen visit VVV on the final day of the season, while Willem II are at home to Fortuna Sittard, whose hopes of snatching the last European play-off place took a huge knock when they conceded an injury-time equaliser to Vitesse Arnhem.

The result secured fourth place and a place in the Europa Conference League for Vitesse as Feyenoord could only draw 1-1 in Almelo. Orkan Kökcü gave Feyenoord the lead midway through the second half, but four minutes later substitute Sinan Bakis levelled the scores from the penalty spot.

‘We all expected to finish higher, but we can still partly make up for it by winning the play-offs’, said disappointed coach Dick Advocaat, whose retirement has been delayed by at least two games by the end-of-season mini-competition.

PSV effectively sealed second place and a place in the qualifying rounds for next season’s Champions League with a comfortable home win against PEC Zwolle, while rivals AZ were held to a 0-0 draw in Groningen.

Eran Zahavi directed a heart-shaped gesture at his wife, who was sitting in the almost empty stand, after scoring PSV’s fourth goal early in the second half. It followed a traumatic week in which the striker’s family were held hostage by armed robbers at their home in Amsterdam.

Sparta hold a narrow advantage in the battle for eighth place and the final Conference League play-off place despite a goalless draw at home to Utrecht. Sparta’s final match is away to Heerenveen, while Heracles, who are level on points with the Rotterdammers, travel to AZ Alkmaar.

Fortuna Sittard will have to hope both their rivals lose and must also overturn Sparta’s seven-goal advantage while beating Willem II.