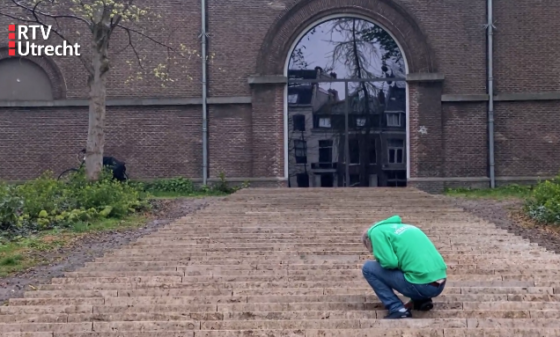 The steps should have been covered with plants. Photo: RTV Utrecht video still

An overzealous Utrecht council worker has accidentally destroyed a work of art involving living plants that had taken volunteers three year to nurture.

The work, which consisted of a flight of steps partially covered by a green carpet of plants, was blasted with a weed burner and ruined in just 15 minutes

Maintenance of The Disappearing Steps, situated behind Utrecht’s Centraal Museum, is normally in the hands of Vergroening Singels030, a group of volunteers who want to make the city greener.

‘I think the council hired a temporary worker who did not know these steps were an ecological project and that the council does not do the maintenance. I heard he was working in the area with a weed burner and that he thought he might as well do the steps as well. It was all gone in no time,’ volunteer Harmke van Dam told the AD.

Artist Birthe Leemeijer from Haarlem, who designed the €250,000 artwork, said ‘it was a great shame that people who had worked hard for three years to build something beautiful would see their work destroyed. We’ll have to start all over again.’

The steps were home to species such as hart’s tongue fern, maidenhair and ivy-leaved toadflax and was meant to show people how many special plants exist and that what are considered to be weeds are actually a boon, especially in inner city areas, Leemaijer said.

An Utrecht local council spokesman said the worker had made an ‘honest mistake’ and the council would pay for the restoration of the steps. ‘We will also consider an addition which will make clear that this is a work of art,’ he told the paper.

It is not the first time a local council has made such as mistake. Last year Rotterdam council workers accidentally mowed a field which was part of a project by the natural history museum to promote wildflowers, bees and butterflies.