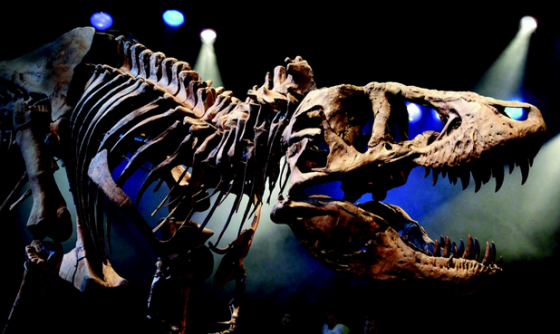 Tyrannosaurus Rex was not very quick when walking the earth 70 million years ago but its tail made it very efficient, new Dutch research has found.

Movement sciences student Pasha van Bijlert teamed up with the Naturalis biodiversity centre to ascertain how quickly one of the biggest dinosaurs discovered to date moved about.

The tail of the animal played an important role, Van Bijlert said. ‘It weighed nearly 1,000 kilos and was held up by ligaments. Ligaments act like a rubber band, storing and releasing energy. In the correct walking rhythm T Rex’s tail began to bounce up and down propelling it forward with little effort. It’s a phenomenon called resonance. People do it by swinging their arms and legs,’ he told broadcaster NOS.

In order to work out T Rex’s most efficient walking rhythm, Van Bijlert and his supervisors Anne Schulp and Knoek van Soest subjected a 3D model to a number of biomechanical tests. They estimated its normal walking speed to be around 4.5 kilometres per hour, comparable to that of human beings.

Previous studies into T Rex’s tempo had not taken the animal’s tail action into account, Van Bijlert said. ‘They neglected the tail which is what makes the dinosaur’s way of walking so unique. They looked at the long hind legs legs which suggest a higher normal walking speed than we found, but ours coincides much better with how fast the living animal would move,’ he told the broadcaster

Van Bijlert, who watched Jurassic Park a few dozen times, switched from medicine to movement sciences as a roundabout way of getting close to his favourite subject – there is no paleontology department in the Netherlands. His next project will be to find out T Rex’s top speed. ‘That will be lot faster,’ he said.