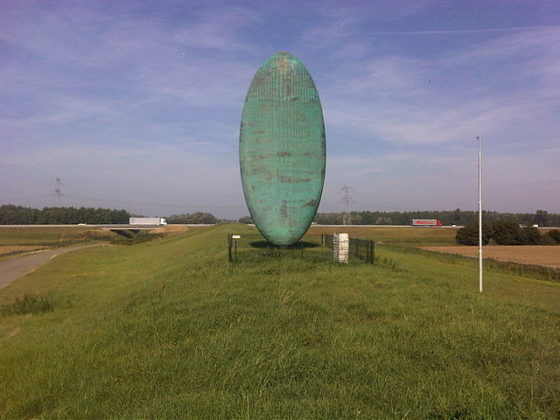 The Tongue when it still belonged to Lucifer. Photo: Albert Kok via Wikimedia Commons

The Tongue of Lucifer, the nine-metre high oval sculpture which sat on the A6 near Lelystad until it was blown over at the beginning of last year is to return to its place under a new name, Flevoland provincial councillors have decided.

The work of art will now be known as the Tongue only, on the insistence of the fundamentalist Christian SGP which said the work was blasphemous because its suggests the devil is sticking his tongue out at God.

‘It hurts me every time I see it,’ chairman of the local SGP Sjaak Simonse said of the work, which is clearly visible to passing motorists on the A6 motorway.

The suggestion by the SGP to move the work indoors was not adopted by the provincial authorities which said at the time it had no intention of depriving Flevoland of one of the region’s best-known landmarks.

Some €200,000 will be set aside for the restoration of the Tongue in 2021. The parties are still wrangling over the question of whether that amount should be higher; the work may need to anchored more firmly to prevent its blowing over again.

‘In a month or so we hope to have the thing back in its place,’ provincial state member Michiel Rijsberman told local broadcaster Omroep Flevoland.

The sculpture, which had been sitting on the Knardijk between Lelystad and Almere since 1993, has been damaged before. In 2006 copper thieves damaged the artwork necessitating a costly restoration and in 2012 it was vandalised again.

It is unclear what Rudi van de Wint, the maker of the sculpture who died in 2006, would have felt about the name change.